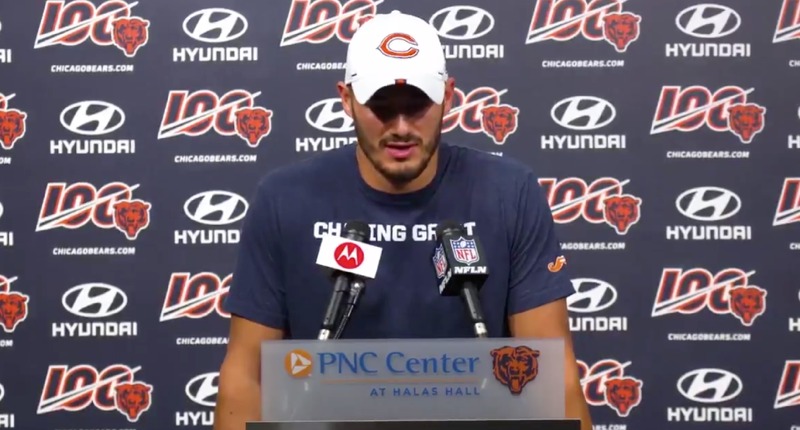 I can’t believe not a single tight end was drafted last night. What gives, MLB?

•   An updated look a the upcoming Zoom conference schedule:

•   I’m looking forward to hearing what Mitchell Trubisky has to say. It’s been a wild offseason for Trubisky, who hasn’t spoken with the Chicago media since the season-finale in 2019. Here’s a timeline of events that have happened since the turn of the calendar year:

⇒  Trubisky was publicly backed by his coach and general manager (because what else where they going to say?)

⇒  With that came a clear difference in opinion between the coach and GM with where Trubisky is in his development. But that’s cool, because they came up with an offseason checklist for the embattled QB.

⇒  And remember, that came only after the team was rumored to be interested in Teddy Bridgewater (and Andy Dalton)

•  To this point, all we have heard from Trubisky is from his brief appearance on Chase Daniel’s podcast (roundup of important football things here) and a nugget through a high school friend who says Trubisky isn’t going to bow out of this competition easily. Hence, my curiosity being piqued knowing Trubisky will speak Friday.

•   As you might expect, Trubisky headlines a Bleacher Report list of players entering make-or-break seasons in 2020. And on a similar wavelength, Danny Kelly (The Ringer) puts Trubisky (and six others) on notice entering 2020.

•   Want to maintain hope for Trubisky and 2020? Here’s the line for you from Kelly: “Trubisky still possesses the athletic gifts that helped make him Chicago’s choice over Deshaun Watson and Patrick Mahomes in 2017.” Unfortunately, Trubisky’s development not going as planned has put him in a situation to where is facing the possibility of starting the year as a backup. Why? “Trubisky is slow to read the defense from the pocket, isn’t aggressive enough attempting tight-window or downfield throws, and isn’t consistently accurate.” That’s damning and disappointing all at once.

•   But as we know, games aren’t won on paper and QB competitions aren’t won in Zoom meetings. I’m looking forward to seeing how this plays out.

•   As JJ Stankevitz (NBC Sports Chicago) points out, there are a healthy number of players who won’t get the opportunities they need to shine if a shortened preseason takes place. ICYMI: The NFL and NFLPA have been discussing the possibility of shortening the preseason from four games to two — which could have a huge impact on the Bears’ competitions at QB and elsewhere.

•   A roundup of what’s been learned from the virtual press conferences that have taken place this week:

3 things we learned from #Bears this week: Demetrius Harris believes he has untapped potential as a receiving tight end. Plus notes on DB Jordan Lucas & CB Buster Skrine.https://t.co/F5bO8Oy6GF

•   Johnathan Wood of Da Bears Blog takes a look at what teams should do in goal line situations. As far as I’m concerned, teams should be aiming to score touchdowns and not settle for field goals. Wood talks about play type, personnel groupings, and more as he dissects what offenses should do when they are that deep in the red zone.

•   Some teams (like the Bears) are ending this virtual workout period early. But for what it’s worth, the NFL will allow workouts to go on through late June:

Clubs have the option to extend their virtual offseason program for another two weeks, or discontinue after this week, which a bunch of teams are doing. The NFL and NFLPA continue to work together on remaining protocols to create a safe reopening for training camp.

•   Buster Skrine shares some good advice for rookies that I’m sure some vets could use, too:

.@BusterSkrine has two tips for the rookies: "Come in shape and know your playbook. If you know the playbook, you’ll get off to a great start."

•   Touching the aux cord in your first year with the team would be a bold move for a role player. But maybe he’ll be more comfortable doing so in Year 2:

Bears CB Buster Skrine wore a Rolling Stones t-shirt to today's Zoom press conference. Says: "I listen to classic rock all the time. You know, I never touch the auxiliary cord in the locker room because I feel like I would get judged off my playlist."

•   Is Walter Payton the best modern QB in franchise history?

That first throw from Payton was a BOMB https://t.co/7ODXU6jTDB

•   You gotta love when the best-case scenario plays out for a change:

•   Jim Boylen broke Lauri Markkanen and it’s up to the new regime to help the Finnisher get his groove back:

Lauri Markkanen’s biggest asset was his versatility, where did that go? https://t.co/vr0JF5LLyQ