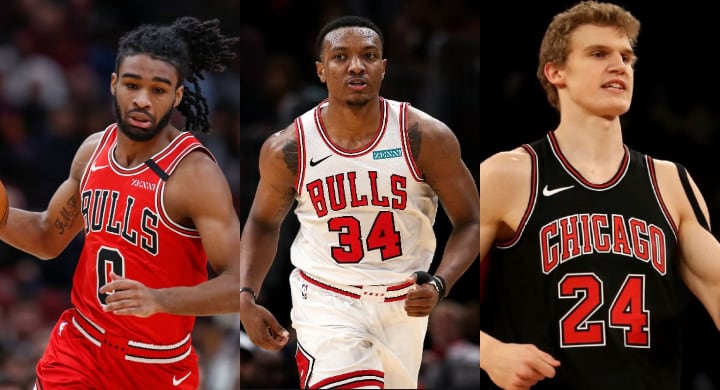 The Bears continue to take a Razor Scooter to our shin every week. The Cubs are on the brink of a rebuild. The Blackhawks are entering a confusing new era. The White Sox just hired Tony La Russa (lol).

Is it just me or are the Bulls one of the few bright spots in Chicago sports right now? I know that can all change in just a few weeks, but I’m going to soak in while it lasts.

•   The 2020-21 season might as well start tomorrow. Franchises will convene for training camp and “media week” in their local markets as they look toward the December 22nd opening night. Considering the world we live in is more unpredictable than your uncle on his fourth glass of holiday nog, we can’t necessarily bank on the season starting smoothly at the end of this month, but all signs point to the NBA pushing through. I’ll be knocking on wood at least three times per day, hoping that the same precaution that went into the bubble can go into pulling off this 2020-21 campaign with minimal bumps. We haven’t watched Bulls basketball in March, and I’m hungry for some action.

•   Training camp will be filled with a number of important storylines – one of which will be the progress of recently-signed players Noah Vonleh and Zach Norvell. News broke that each signed a one-year deal with the team last week, and Yahoo Sports’ Keith Smith recently confirmed that Vonleh’s is a non-guaranteed deal heading into training camp. I think we should assume the same for Norvell. If I’m correct, this means the team has one more training camp spot available, so we’ll have to keep an eye on whether or not they invite another face over the next day or so.

Noah Vonleh got a non-guaranteed contract from the Chicago Bulls. Vonleh's contract will become fully guaranteed on opening night.

•   With Norvell in the mix over the next couple of weeks, the Bulls will have two hometown kids at the Advocate Center (Devon Dotson, who is on a two-way contract, is the other). Love to see it.

•   Smith also reported that free-agent signee Garrett Temple is on a $4.7 million contract. For what it’s worth, that is less than the $5 million that was initially reported. For his positive locker room vibes and serviceable rotation skills, that kind of deal is fine with me. Do I wish the Bulls did something sexier? Yeah, but it is what it is.

Garrett Temple got the equivalent of the Room Exception from the Chicago Bulls, but got it as part of the Bulls Non-Taxpayer MLE. One year at $4,767,000 for Temple.

•   Why is it what it is? Development, of course! I’ve also been frustrated by the fact that all this big change behind the scenes has not immediately translated on to the court. At the same time, I can understand the hesitation. There is a reason this organization invested so heavily in their player development department right off the bat, and that reason is to finally get a legitimate look at this young talent. People around the league believe the Bulls have some interesting pieces in place, but the only way to find out is to put them in a position to succeed. I think we can all agree the head coach that shall not be named did not do that. Donovan, on the other hand, is a guy that has proven to do just that with players over his coaching career. It’s finally time to find out who should stay and who should go.

•   For those who have wanted me to be a little more critical of the Bulls quiet offseason, I’ll share this: The 2020-21 season is the last chance to give these guys a shot. The organization has decided to fix things internally and keep the same roster, which means now is the time to make decisions. Lack of movement this offseason means there should be movement this season. As the evaluation process goes on, I expect to see active decision-making. I want to see trades during the season and/or at the deadline. I want to see a clearer sense of direction as the season goes on. If Carter Jr. is a piece they envision as vital moving forward, then he should be an increasingly large part of the gameplan. The same goes for Lauri Markkanen. The new front office needs to do what the old one did not – embrace change and promptly make up their minds. If this is truly a “retooling” and not a “rebuild” like GM Marc Eversley said, then he needs to show us.

•   Can’t wait to get way too excited about a guy who may or may not ever see actual court time for the Bulls!

I nominate the homie James Johnson. Heard he blackbelt https://t.co/oUxguhuFMg