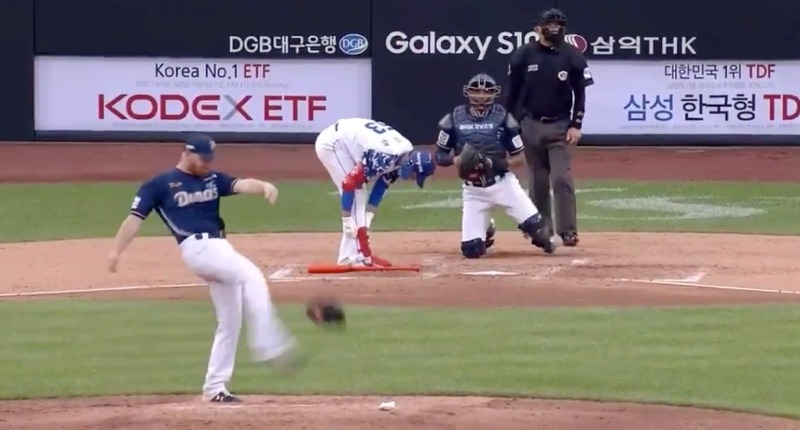 Do you remember Eddie Butler? The Cubs traded for Butler back in February of 2017 and he wound up making 11 mostly disastrous starts for that team (5.62 ERA), before being traded to the Rangers in the Cole Hamels deal last season. Well, after another rough season in the Majors, Butler took his talents to Korea, signing a one-year deal with the NC Dinos of the KBO League.

And by the looks of it … things aren’t going great there either.

Watch his reaction after letting a ball get away from him:

Extremely immature and disrespectful behavior by NC Dinos RHP Eddie Butler in tonight's game. Makes you wonder if he would do such a thing on a #MLB mound. #KBO pic.twitter.com/xUgL27Rzg0

I … I can’t believe he did that. I’m dying of laughter.

It’s not that I wish him any ill or whatever, it’s just … it’s not like things were going all that bad, right? Yeah, that pitch resulted in a walk, but it was a one-run game in the 5th inning. And given that his pitch count ticked up to 69 on that throw, he was clearly starting the game, which means that was having a pretty dang decent start so far. I just can’t see where all the frustration came from. That’s just so odd and so hilarious.

And that’s not the only absurdity out of the KBO this week. Earlier today, we watched a ball bounce OFF shortstops head … and be caught by the left fielder:

I think the KBO might be better than MLB.