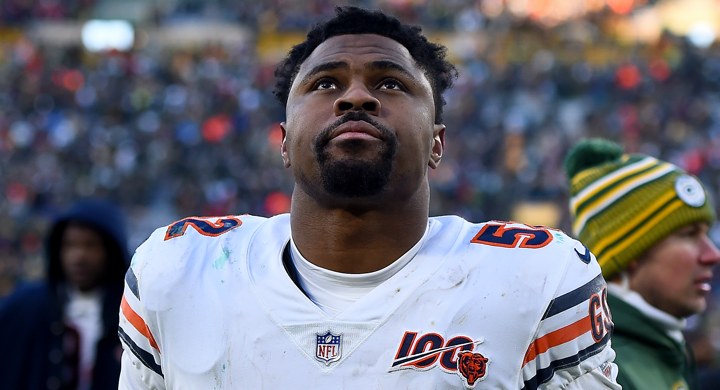 Khalil Mack is the highest-paid member of the Chicago Bears. He has a 2020 salary cap charge of $26.6 million, which represents more than 12 percent of the team’s total space. Mack still has five years left on the deal he signed with the Bears, which comes at an average cap number of $25.8292 million. So, yeah, he’s gonna be here for a while.

I’m not sure the same can be said about Leonard Floyd, who will play the 2020 season under the fifth-year option of his rookie deal. Floyd will make $13.2 million in 2020, but that pricy cap charge could be enough to push the Bears to come to an extension that lowers his cap hit.

To say this group is light on returnees is putting it kindly.

If creating cap space is a priority for the Bears this offseason, the cutting Floyd makes sense. Sure, it would open up a hole on the roster and put the Bears in the hunt for a starting-caliber edge defender opposite of Mack. HOWEVER, clearing $13.2 million and re-allocating that money en route to doing so doesn’t seem like the worst idea.

Let’s face it, Chicago’s front office needs to be cap-conscious with how it re-tools the edge rusher position this offseason. In addition to Mack’s massive deal, Eddie Jackson, Kyle Fuller, Eddie Goldman, and Akiem Hicks are standout Bears defenders who have signed extensions in recent years. Salary capped leagues force teams to make tough decisions on whom to pay, which could leave the Bears making a tough business decision on a player they drafted and developed into a respectable starter in the league.

With that being said, the obvious way to upgrade the position is to draft a long-term option who can play complementary football across from Mack — a player whose superstar abilities should allow for opportunities to be had for whomever is lined up across from him. The Bears won’t be in a position to draft one of the top-tier pass-rushers such as Ohio State’s Chase Young or Iowa’s A.J. Epenesa. But the second round could yield options such as Yetur Gross-Matos (Penn State), Terrell Lewis (Alabama), Bradlee Anae (Utah), and Jonathan Greenard (Florida).

The alternative to drafting the player who will line up on the opposite side of the formation from Mack could be to cut Floyd, then re-invest the cap space in a free agent replacement. Vic Beasley comes to mind as someone who — while not replicating his All-Pro 2016 season — has played well enough in the years since to be considered an upgrade from Floyd. What his market looks like in free agency will be worth keeping tabs on when the “legal tampering” period begins.

Another option could be to roll the dice and search out someone like a post-hype sleeper who could use a change of scenery to unlock their potential. Someone like Dante Fowler (No. 3 overall pick in 2015) or Shaq Lawson (19th overall pick in 2016), for two examples, might not command top dollar when free agency begins. A best-case scenario would be to find the next Shaquil Barrett, who racked up 19.5 sacks and 37 quarterback hits in 2019 after collecting just four sacks in his previous five seasons. Admittedly, that’s a huge ask.

To be clear, none of this is a diss on Floyd. Four years into his rookie deal, Floyd hasn’t proven to be a solid contributor across the board (even if he isn’t spectacular in any one given area). And while he hasn’t lived up to the billing of a top-10 pick, Floyd hasn’t been without value to this team. It’s just that the Bears need more from an edge defender whose contract has the sixth-highest cap value in 2020.