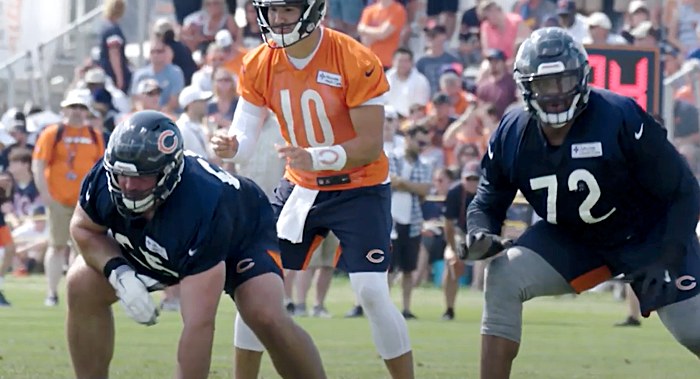 There are days where I find myself wanting to write a thousand words in an attempt to drive home a point.

But instead of that, here’s a tweet with far fewer words, and (hopefully) just as much impact:

"The Bears' offensive line was charted with 124 blown blocks last season by Sports Info Solutions and has ranked 28th and 29th in adjusted line yards the past two seasons."

FOR THE LOVE OF HALAS, GO SIGN LARRY WARFORD!

I simply cannot understate the Bears’ need for improved offensive line play, so I figured sharing a tweet underscoring the issue would do the trick.

So let’s magnify that: *ONE HUNDRED AND TWENTY-FOUR*.

That’s a lot of blown blocks. Basic math shows that’s nearly eight per game. Biffing between 7-8 blocks per game really adds up in a big way over time. Heck, it doesn’t take much to put up an argument that enough of those blocks added up to keep the Bears out of the playoffs. And that’s saying nothing of their bottom-tier ranking in adjusted line yards the past two seasons, per Sports Info Solutions’ data.

Maybe the Bears are putting their eggs in a basket held together by the idea that four of the five returning starters were part of a group that Pro Football Focus ranked in the top half of the league at the end of the 2018 season and in the top-10 entering the 2019 campaign. It doesn’t take too much of an imagination to envision that group rounding back into form with renewed focus and vigor. However, it’s not a basket I would put all of my eggs in right now.

So with that in mind, the Bears should continue to monitor the Larry Warford situation. Play the market, find a median price that the two sides can agree upon, and get ready to go to work whenever the 2020 season kicks off. Otherwise, Chicago’s football team is going to have questions beyond whom the long-term quarterback solution should be.

Larry Warford Update: The Bears Were in Before, Aren’t Actively Pursuing Him Now, But Could Circle Back in the Futurehttps://t.co/c8S9DVBxkO