You Wanted It, You Got It! Now Be Patient with Justin Fields Skip to content 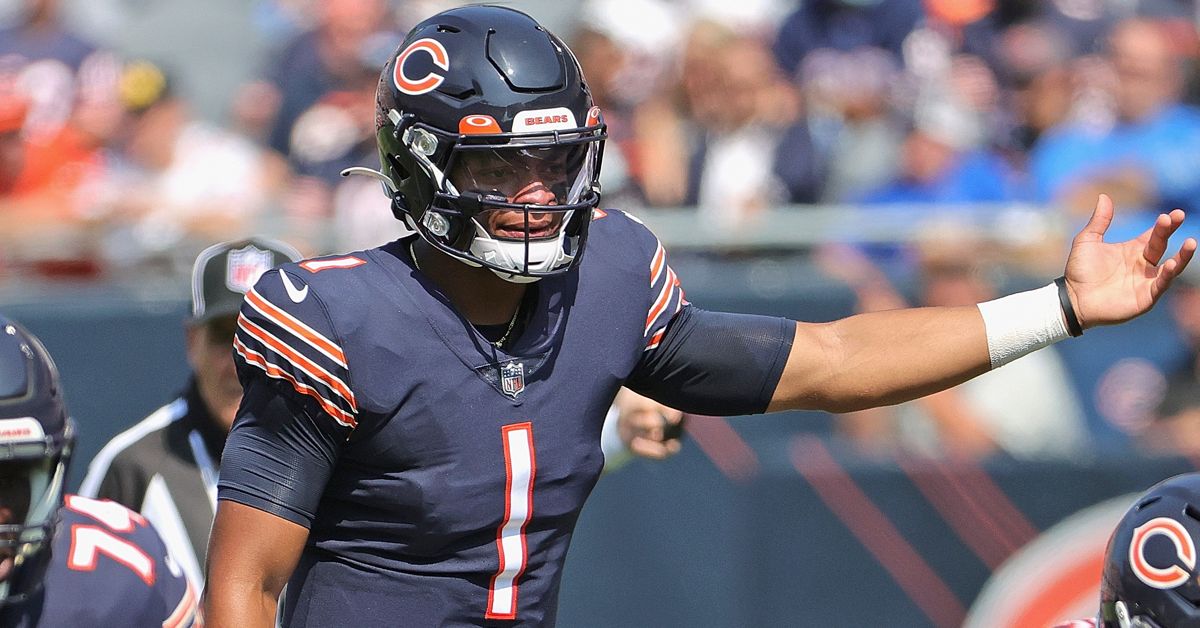 Just 143 miles from where Justin Fields awed the college football world for two seasons, the Chicago Bears rookie will make his first career NFL start at First Energy Stadium, home of the Cleveland Browns, this Sunday.

It’s a moment Bears fans have been clamoring for since Ryan Pace traded up to select Fields last April’s NFL Draft.

A franchise notoriously deprived of competent quarterback play believes that they might finally have their guy in 22-year-old Justin Fields. And based on his collegiate excellence, you can understand why.

Fields threw for 5,373 yards and 63 touchdowns (to just nine interceptions) during his two seasons as a Buckeye and led Ohio State to two College Football Playoff appearances. The first was a semifinal loss to Clemson in 2019. But Fields and his Buckeyes avenged that loss when they met the Tigers the next season on the strength of a performance for the history books for Fields.

Fields thoroughly outplayed the eventual No. 1 pick in 2021 NFL Draft, Trevor Lawrence, completing 22-of-28 passes for 385 yards, six touchdowns, and one interception en route to a 49-28 victory. It was one for the ages:

Fields and the Buckeyes would eventually lose the CFP Championship to Alabama, but Fields’ legend in Columbus was already solidified, and his NFL Draft stock was affirmed.

Fast forward to summer/fall ’21, and the plan for Fields in Chicago was a slow-roll by Matt Nagy and his staff. But as Luis said earlier this week, “while humans plan, the football gods laugh.” So with Andy Dalton nursing a bone bruise in his knee, Fields gets his shot on Sunday. But, of course, there’s a caveat: Nagy insisted that Andy Dalton is the Bears’ starter when healthy. If Fields struggles as the starter, Nagy could be setting up an escape route back to Dalton and his original plan of slow-rolling the rookie’s first season. Or, he could simply be showing respect to the veteran Dalton, who, in all fairness, has handled this whole situation with an impressive amount of grace. Either way, Fields has his shot at taking this job from Dalton for good, starting this Sunday. But I think it’s essential to talk about managing expectations.

Fields wasn’t great last week in relief of the injured Dalton. But he wasn’t bad either (Michael: if Darnell Mooney and Allen Robinson make those catches, his line looks very different). He completed 6-of-13 passes for 60 yards and an interception, and ran for 31 yards on 10 carries. Last week wasn’t his week, however, and we hope Nagy will have a different game plan for the offense with Fields under center this weekend. Still, the key takeaway here, for me, is that for all of the athletic ability and splash-play potential that Fields has, he is still a rookie. Mistakes are coming. Prepare yourself mentally for them now (Michael: We already saw some on a couple of false start penalties last week).

That doesn’t mean that we won’t see Fields unleash his insanely accurate rocket arm. Remember this 61-yard strike to Chris Olave at the Sugar Bowl?

This was the longest throw of Justin Fields’ career🚀

61 yards vs Clemson in the Playoffs

That doesn’t mean that we won’t see him flash that 4.4-40-yard dash speed.

This is some serious hustle by Justin Fields.
The QB ran about 60 yards to make a block on the touchdown run. pic.twitter.com/qpdG2mSCvH

It means that, while we’re going to see all of the unique talents that Fields possesses on display, we’re going to watch him learn the NFL game on the fly. And we should do our best to understand that when he makes mistakes. Remember, this is what we wanted. The calls for Fields to be QB1 have been consistent since the jump, and they’ve been loud.

Veteran left tackle Jason Peters reiterated what we’ve seen and heard about Fields from a mental standpoint; he’s stoic, and he’s not phased by the gravity of the situation he now finds himself in:

Bears left tackle Jason Peters on Justin Fields: "He's very confident, so when he calls a play you just want to make sure you do your job because you definitely believe in the kid that he's going to make a play for you. And most of the time he does."

Fields will lean on his stoic nature and other-worldly athleticism as he learns to be a starting quarterback in the NFL, but nothing replaces experience. If Nagy (finally) can live up to his reputation as a dynamic play-caller, given the right quarterback, Fields should be able to play well enough to keep the starting job for good.

If Fields can throw for over 170 yards and at least two touchdowns on Sunday, he’ll have put together the best Bears rookie quarterback debut this century.

We all want to see Fields light it up on Sunday against the Browns, and it’s not inconceivable that he can. But let us remember that it’s just one game if things don’t go exactly according to plan.

The future under center is here for the Bears; take it in and enjoy it.