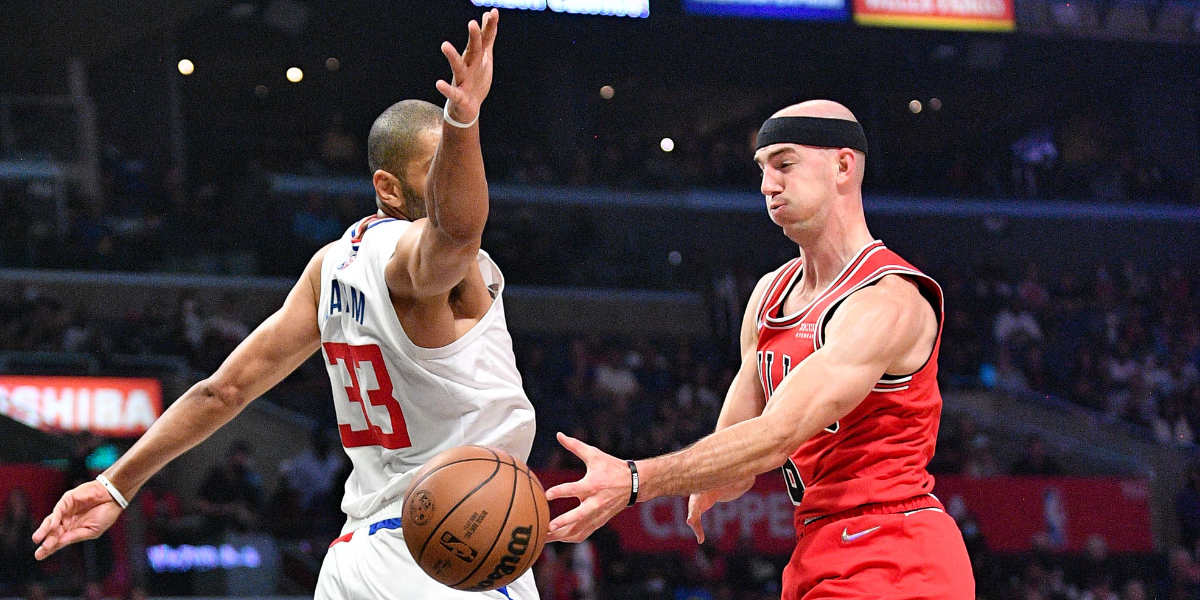 Brb, gonna tattoo this across my back.

•   When the Golden State Warriors rudely welcomed the Chicago Bulls to the west coast with a 119-93 stomping, Bulls fans saw just how complicated a life without big man Nikola Vucevic could be. Not only was the offense’s spacing all out of whack, but the rebounding discrepancy made it nearly impossible for the Bulls to carve away at the Warriors’ growing lead. Until the big man could be added back into the lineup, it was clear adjustments needed to be made, and that is exactly what head coach Billy Donovan did in Sunday night’s matchup against an experienced Clippers team.

•   Javonte Green moved out of the starting lineup and in his place slid Alex Caruso. Likewise, when Donovan went to his bench midway through the first quarter, there was no Alize Johnson to be seen. The small-ball five was benched in favor of the even smaller Derrick Jones Jr. Both somewhat surprising moves helped the Bulls get off to one of their better starts of the season, outscoring the Clippers 30-17 in the first quarter.

“I thought from a spacing standpoint and maybe using Javonte and Derrick’s energy out there athletically where we can try to switch and trap some and be disruptive and try to get them a little bit more active. It’s a little bit unconventional, but I felt like it was playing to those guys strengths,” Donovan told reporters after the game.

“And I thought starting the game getting some spacing on the floor with Alex as another ball-handler, creator, a driver, that could kind of open it up and I thought we got off to a hot start.”

•   There was no denying from start to finish that the Bulls looked like the more athletically-gifted team, and their “switchability” on the defensive end gave this solid Clippers offense plenty of problems. Los Angeles shot just 35.8 from the field and 32.4 behind the arc, making it one of their poorer offensive showings of the season. The Bulls also returned to the right side of the turnover margin, forcing LA into 20 turnovers compared to their 15.

•   While Caruso failed to make the most of his starting opportunity shooting the basketball (2-11), he did practically everything else the Bulls wanted. The defensive hound forced 3 steals and hauled in 9 rebounds (three of which were offensive). Caruso also tied with DeMar DeRozan for the team-high in assists with five. His +16 was easily a game-high, as he continued to demonstrate that no matter the lineup, he will find a way to have a positive impact on both ends of the floor. With that said, I am curious to see how much longer he stays a member of the starting unit. I still arguably prefer his defensive energy off the bench, and I think pairing him alongside Coby White in that second unit could lead to quite the balanced one-two punch as the season goes on.

DeMar DeRozan on Alex Caruso: "He's one of the highest IQ players I've played with since I've been in the game."

•   Speaking of which, the return of White tonight should help immediately solve a problem that has occurred in the wake of Vucevic’s absence. With the Bulls big man off the floor, and the need to still stagger LaVine and DeRozan to keep the offense rolling, opposing defenses have been able to trap or double-team the two All-Star scorers successfully. While the Bulls bench has provided great hustle and defensive intensity, no one in that unit poses a strong enough threat shooting the basketball to deter teams from taking this aggressive defensive approach. The addition of a sharpshooter like White, however, will have to make teams rethink focusing solely on either player. Not to mention, it should also open the door for LaVine and DeRozan to eventually clock even more minutes together, which we all know has been a big-time recipe for success to start this season.

•   ALEX CARUSO REVENGE GAME. We learned last week that the Los Angeles Lakers refused to budge when it came to offering Caruso a low-ball offer this summer, and The Athletic’s Bill Oram wrote even more about that in the wake of tonight’s Bulls-Lakers matchup. I encourage you to give it a read – if not to learn more about the Lakers’ stupidity than to see Caruso finally realize how much annoying love the Lakers get.

•   Even if the Bulls drop another couple of games on this road trip, we have to remember arguably the most encouraging thing: This team should only get better. Not only is White set to get his feet wet tonight, but it’s only a matter of time before Nikola Vucevic rejoins the team and finds his shot.

These were the Bulls last 8 opponents:

They are 5-3 in that span despite missing their starting PF and C. pic.twitter.com/UEt0WGqmT2

•   Another statement game on national television!

This is a matchup you don't want to miss 👀

The @chicagobulls take on the @Lakers at 10:30pm ET on NBA TV! pic.twitter.com/v4JlBHHjYr