The Chicago Bulls Are For Real, Shutting Down AD, DeMarvelous DeRozan, and Other Bulls Bullets Skip to content 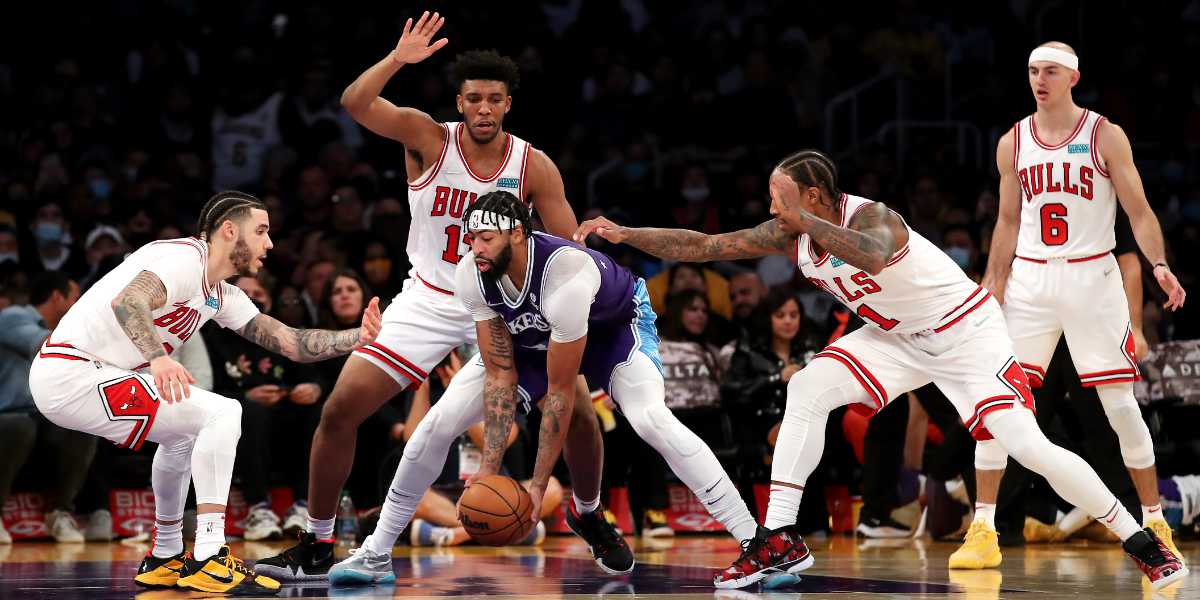 The Chicago Bulls 121-103 victory over the Los Angeles Lakers wasn’t a statement, it was a continuation.

Ending the Utah Jazz’s undefeated season, coming back from down 19 against the Boston Celtics, and snapping the Brooklyn Nets five-game winning streak can all be considered statement wins. But how many statements can you make before there is nothing else to be said?

In my opinion, taking care of the 7-3 Dallas Mavericks, ending the Clippers’ seven-game winning streak, and blowing the doors off the Lakers simply represents who this Bulls team is now. A 10-4 start to the season with the 4th-best Net Rating in the league and the only top-10 scoring duo is not some kind of fluke. Whether it’s the record, the stats, or the A+ vibes, the Bulls are for real, and I guess it’s officially time we start treating them as such.

•   One night after holding Paul George to one of his worst offensive performances of the season (7-25), the Bulls defense posted an even more impressive display against the towering Anthony Davis. I’d be lying if I said I didn’t see at least 25-30 points and 10-15 rebounds in Davis’ future around 8:30 p.m. last night. After all, he scored 34 points and hauled in 15 rebounds the games before on a dominant 14-24 performance against the Spurs. The Bulls were also missing their All-Star center, and we all know the size in the frontcourt behind Tony Bradley leaves a lot to be desired. But, fortunately, size isn’t everything! Head coach Billy Donovan threw the kitchen sink at Davis. Chicago refused to let the big man beat them, repeatedly attacking him with double-teams and holding him to just 7 points in the first half. A vicious and communal effort on the glass also held Davis to just 6 total rebounds.

•   How frustrated did it make the big man? Let’s just say … frustrated enough.

Anthony Davis Was Ejected from the Game, Which Brought a Plain-Clothes LeBron James to to the Courthttps://t.co/XxVLz24huA pic.twitter.com/u0PsP1qmAT

•   If we were to single anyone out for their defensive hustle, however, it would have to be Derrick Jones Jr. The athletic forward held down the fort against the Lakers as an extreme small-ball five off the bench. Using his length and quickness, Jones refused to let Davis get into his action. According to NBA Stats matchup data, Jones didn’t even let Davis get a single shot up in the 4:14 he spent guarding him last night. Davis only scored 3 points, all of which came at the free-throw line.

•  I was always high on Jones’ potential on this Bulls team, specifically in the frontcourt which is where the Blazers failed to use him time and again last season. Not only is he truly one of the game’s most athletic players, but the length he provides can be an extremely deadly weapon on both ends of the floor. While he is likely never going to be known as a shotmaker, I loved to see the Bulls use Jones in more PnR action last night. The dude repeatedly rolled hard to the basket and his mix of verticality and quickness either helped him finish over defenders or force contact. I’m not sure how often we will see this moving forward, but I’d sure like to see Donovan give Jones a few more opportunities in that setting. The more he can creep his way to double-digits off the bench, the more balanced this second unit becomes.

•   Speaking of which, Coby White made his return! The Bulls third-year guard made his presence felt immediately, dunking on Davis and draining four first-quarter 3’s! *Touches earpiece* What’s that? None of that happened? Not even close? Why do I have an earpiece if I’m just sitting in a hoodie on the couch writing dumb things about the Bulls? Fine, White’s season debut wasn’t anything to rave about. In fact, he looked pretty damn lost in the confines of this Bulls offense, and he finished the night with exactly 0 points and one rebound. But, hey, we got to start somewhere, right? The expectation for White over these next few games should be pretty low. Not only is he clearly still on a minutes restriction (only 11 minutes last night), but he is entering an entirely new system. At the end of the day, I think the way this Bulls team operates will complement White’s skillset beautifully, but it will take time for him to get comfortable on a group playing legitimately good basketball.

•   DeMar DeRozan has taken every single hater out to dinner, poured them a nice aged bottle of red, placed a decadent chocolate cake in front of them, and then smashed their head into that cake before pouring the wine straight down their pants. After the initial signing, I was high on what DeRozan could bring to Chicago, but I can not sit here and act like I saw this coming. I mean, the guy is currently the 3rd-highest scorer in the league and posting one of the most efficient seasons of his career. Even more impressive, as someone who built up a reputation for being a generally negative influence while on the floor, his on/off differential sits at an absurd +21.1 this season, per Cleaning the Glass, which ranks in the league’s 93rd percentile. Much more on him coming later today.

•   When asked about all the preseason concerns about his fit on the Bulls and the expectations for this team after last night’s game, DeRozan kept it simple: “I don’t know where people get these narratives or make up these suggestions that they make but it’s crazy. If you can’t tell by this, you probably need to take some medicine or something,” he laughed.

•   Caruso may not have lit up his scoreboard in his Staples Center homecoming, but he still added 6 rebounds, 5 assists, and 2 steals on an overall +28 performance. Miss him, LeBron?

After struggling early in the season, Cole Kmet is emerging as one of Justin Fields’ favorite targets, and the second-year tight end is trending towards a breakout. https://t.co/fsoETan5KN