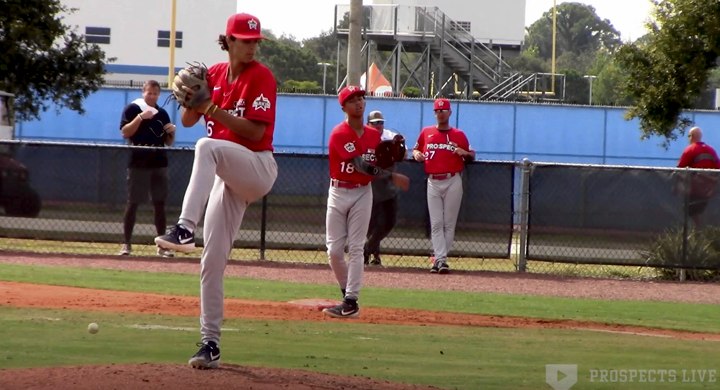 The Cubs didn’t take a traditional college starting pitcher in the draft this year. How’s that for a change of pace?

The Cubs final pick in the 2020 Draft is Koen Moreno, a prep pitcher from North Carolina.

Moreno was unranked by MLB Pipeline, FanGraphs, and Keith Law, but Baseball America? They see him as a sleeper:

The Cubs get high school RHP Koen Moreno at 147. @CarlosACollazo has been saying Moreno is a sleeper for … well … a while.

Ranked all the way up at 128, here’s what BA had to say about Moreno:

Moreno is one of the more athletic pitchers in the prep class and he also participated in basketball and track at Panther Creek High in Cary, N.C. A 6-foot-2, 170-pound righthander committed to East Carolina, Moreno doesn’t have a ton of innings on his arm and scouts were impressed with the consistent steps forward he made last summer. At East Coast Pro, Moreno threw a fastball in the 87-93 mph range and ticked up to 94 at the Future Stars Series during the fall. He has exceptional feel to naturally spin a breaking ball, but the pitch needs continued refinement to become a plus offering. It shows solid depth and three-quarter shape in the 73-78 mph range, but it’s hittable when he leaves it up and only flashes sharp biting action. Moreno also showed feel for an 81-85 mph changeup that he throws with good arm speed and had swing-and-miss qualities with average or better potential in the future. Moreno is a projection arm in the true sense of the definition, with plenty of room remaining on a lean frame, athleticism that should allow him to make big strides in the future and an innate feel for spinning a baseball. Scouts didn’t see him pitch much at all this spring with a shortened 2020 season, but he was a candidate to take a step forward stuff-wise. It wouldn’t be surprising for a team to bet on his upside now in the 3-5 round range—if he makes it to East Carolina he could easily become a top-three round talent.

That reads like the kind of high school pitcher the Cubs have taken an occasional swing on in the 5 to 7 round range, or 11 to 15. I suspect they wouldn’t have grabbed Moreno here if they didn’t feel they could sign him, but I don’t see a ton of slot savings in the first four rounds, and slot here for the Cubs is just under $370,000. Of course, they can go over their total bonus pool by up to 5%, so that’s another $300,000 or so to play with, and maybe a good portion is already earmarked for Moreno.

Saw #Cubs 5th rounder Koen Moreno at STP (now Truist Park) this fall. Loved the projection of the frame and the arm speed. FB sits in the low-90s, CH is going to be plus, CB is a solid secondary with potential too. #MLBDraft https://t.co/r6a32Jag6u