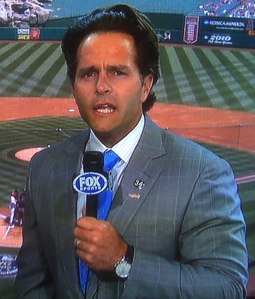 Interviews with candidates to fill Bob Brenly’s job as the color commentator on Chicago Cubs broadcasts will begin this week, and the Cubs may have a list of five finalists for the job.

According to CSN’s sources, Dan Plesac, Rick Sutcliffe, Eric Karros, Todd Hollandsworth, and Gary Matthews are the five remaining contenders for the job.

We’ve heard a fair bit about Plesac, about Sutcliffe, and about Karros already. Hollandsworth, as a pre-and-post-game analyst for CSN who’s filled in for Brenly on occasion, was always expected to be a candidate. Matthews does the color job for the Phillies currently.

What I find most surprising about the list is the fact that we could have – and did – named everyone on that list the very day Bob Brenly announced his departure. I would have thought there would been a name out of left field. Sarge is probably the closest to that, but obviously he has the Cubs connection.

I’m not complaining about the names, of course, as I think a couple of them could be fine. I do wonder whether the expiration of the WGN contract after 2014 is impacting the search. If WGN can’t offer a deal longer than two years, it’s easy to understand why they might have to focus on guys with a Cubs connection – guys who might have a special incentive to want the job beyond money and security.

WGN will handle this round of interviews, with input from both the Cubs and CSN.