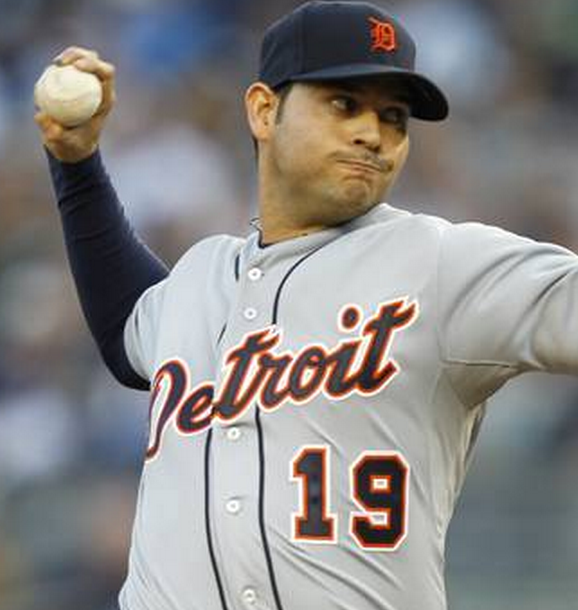 I’ve been banging the Anibal Sanchez drum for most of the offseason, and it sounds like I might be getting my wish. According to Bob Nightengale and Ken Rosenthal, the Cubs are currently finalizing what would be a five-year deal for free agent starting pitcher Anibal Sanchez. There will be many updates.

UPDATE 1 (4:54pm CT): Ok, so your time-line is as follows – the Cubs and Tigers were both pushing hard for Sanchez, and as of 10 minutes ago, Rosenthal said the Tigers were still a possibility. Then Nightengale said the Cubs had broken through, and come to terms with Sanchez. The deal “could be” worth $75 million over five years, which would just be fantastic.

UPDATE 2 (4:56pm CT): Jon Heyman says the Cubs are indeed working hard on Sanchez, but currently deny they have a deal. Given how these things sometimes play out, your excitement should be kept tentatively in check.

UPDATE 3 (5:00pm CT): For those who’ve missed my earlier pushes for Sanchez, consider that he’s a 28-year-old starter who has been improving the last few years, and has been excellent the last two years. Given his age, I would love this signing for the Cubs, regardless of where they are in the rebuild.

UPDATE 4 (5:01pm CT): Heyman reiterates that this isn’t a done deal, and Sanchez’s agent says he’s still talking to other teams, including the Tigers.

UPDATE 5 (5:02pm CT): Worth noting that there was no equivocation in Nightengale’s reporting – he said the Cubs had agreed to terms with Sanchez, and the only thing left to do is a physical.

UPDATE 6 (5:03pm CT): Heyman wants it to be very clear that, from his perspective, nothing is final. Sources tell him the Tigers are still very much in it for Sanchez. You knew it wouldn’t be simple.

UPDATE 8 (5:09pm CT): Jon Morosi agrees with Jon Heyman: not a done deal, according to sources. He cautions that it might be a long night. Damn it. I was supposed to go get Chipotle …

UPDATE 9 (5:15pm CT): For posterity, it’s worth noting that Jim Bowden also said that Sanchez “has signed” with the Cubs … in a tweet that has since been deleted.

UPDATE 10 (5:17pm CT): Well, Nightengale felt strongly enough about his report to write it up for USA Today. His source is “an official with direct knowledge.”

UPDATE 12 (5:23pm CT): The Chicago media is entirely silent so far, which means either they can’t track anything down yet (unlikely), or they’ve been told to keep it zipped, and are obliging. I still expect them to chime in soon.

UPDATE 13 (5:24pm CT): That was fast – Dave Kaplan says he’s got very good sources telling him it’s not a done deal. The Cubs are trying to finalize it, but the Tigers are still in play. Grumble.

UPDATE 14 (5:27pm CT): I’m hoping that what we have here is the Cubs making an acceptable offer, and then Sanchez’s agent taking it back to the Tigers one last time to try and see if they’d top it. And from Kap: “Cubs told another agent for a free agent pitcher they were down the road w/Sanchez + would call if they lost out. Agent hasn’t heard back.” That’s good, at least.

UPDATE 15 (5:31pm CT): Like Nightengale, Rosenthal feels strongly enough to do the full write-up thing, but his version is that the Cubs and Sanchez are in serious discussions. The Tigers remain involved.

UPDATE 16 (5:33pm CT): Phil Rogers offers a report, but there’s not much new. The Cubs obviously aren’t offering so much as a whiff on this one.

UPDATE 17 (In line at Chipotle): Nightengale is sticking by his story so far, just now tweeting it out again and suggesting Hamilton signing was catalyst because it took Angels out of market for Sanchez.

UPDATE 18 (Still): Bruce Levine weighs in with a Detroit source (not Chicago?) who says they’ve not yet been informed they are out.

UPDATE 19 (Still): And Nightengale finally backtracks. He says Cubs thought they had a deal, but as I guessed, Detroit is being given opportunity to match.

UPDATE 20 (Still): Nightengale adds that Detroit was at four years, but if they go to five, he’ll sign with them.

UPDATE 21 (6:13pm CT): The nightmare tweet, from Nightengale: “The #Cubs, among others, did not know that #Tigers would have last chance to match. And the #Tigers have just bumped their offer to Sanchez.”

UPDATE 23 (6:20pm CT): I didn’t want to say it earlier for a (ridiculous) fear of jinxing it, but now that the cat is out of the bag … 5 years and $75 million in this market for Sanchez is a freaking steal. Sigh.

UPDATE 26 (6:58pm CT): Gordon Wittenmyer checks in, saying the Cubs and Tigers are both in plan, and it may just be a waiting game for all sides at this point. For my part, by the way, I have heard absolutely nothing on this one.

UPDATE 27 (7:12pm CT): Dan Plesac says his gut tells him Sanchez will re-sign with Detroit now that the Tigers have countered the Cubs’ offer (is Plesac an insider?). Bruce Levine says someone must have really throw Nightengale a curveball because “he doesn’t make these kind of mistakes.”

UPDATE 28 (7:14pm CT): Paul Sullivan on my agent suspicions: “Cubs not commenting on premature report of Sanchez signing. Sounds like a double cross by the agent. Too bad.”

UPDATE 29 (7:29pm CT): Kap has discussed this with Nightengale, who says if the money is even, Sanchez is choosing the Tigers. Kap implies that there’s a decision coming tonight. I can’t help but believe the Cubs will lose him if the numbers stay at 5/$75M.

UPDATE 30 (8:44pm CT): Nightengale is starting to waiver in his confidence that we’ll hear tonight. He says he was told that, but he obviously had wrong information earlier (implying that he could be wrong again this time). He added that it’s “getting late.”

UPDATE 31 (8:53pm CT): Kap tweets the following, which is only applicable here by inference: “Trying to text/work the phones while hosting 3 hr radio show. Hearing Cubs are in play on P Mike Adams (Rangers) Carlos Villanueva (Tor).” Is Villanueva the back-up pitcher about which Kap spoke earlier? Kind of feels that way, even though he and Sanchez are not in the same class. It would be hard to imagine the Cubs talking both Sanchez and Villanueva into signing on when the Cubs “already have” five starters (even though it would be awesome to get both). Thus, seems like Villanueva is indeed the back-up plan.

UPDATE 33 (9:25pm CT): Tony says he doesn’t expect anything tonight. It could come down to Tigers blinking and ponying up extra cash, or Sanchez blinking and going for the money with the Cubs. I’m getting the sense that he really doesn’t think the Tigers are going to outbid the Cubs on Sanchez … but that doesn’t mean the Cubs will get him.

UPDATE 34 (9:41pm CT): Kap adds on the radio that he hears Villanueva is not being viewed as a fallback for Sanchez. The Cubs want them both.

UPDATE 35 (9:45pm CT): Paul Sullivan offers his write-up, and he says the Cubs “aren’t optimistic” about landing Sanchez at this point, and he’s “expected” to go back to the Tigers.

UPDATE 36 (10:00pm CT): A humorous exchange – Matt Garza tweets that he’s anxiously awaiting word on the Sanchez deal, and then Carrie Muskat tweets at him that maybe Garza should give Sanchez a call with a sales pitch. Too funny, too true.

UPDATE 37 (10:45pm CT): And Nightengale corrects himself for the second time today, saying that we aren’t going to hear tonight. Talks with the Cubs and Tigers are expected to resume tomorrow. Grumble.

UPDATE 38 (7:30am CT): Nothing significant overnight, as expected. I’ll likely be making a new post when we get an update today. And I’ll try to do normal posting, too, as if I’m not just obsessing about Sanchez.