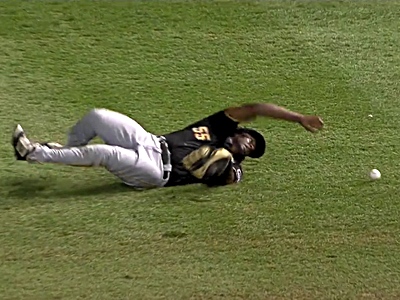 It’s had a bit of a tortured history, with peculiar drainage issues, resurfacing projects, and, in recent years, damage from concerts. But, on the whole, it’s really not a bad outfield. It certainly isn’t the kind of outfield where you’d expect outfielders to constantly be tripped up for no reason in particular.

Still, one of our favorite memories from the 2015 season was Gregory Polanco’s inexplicable tumble as he tried to make a play on a pop fly in an extra-inning affair, which turned into a game-ender:

The play remains the gold standard of go-to GIFs when wanting to visually embody a Pirates failure of any kind:

Now, then. I’m not saying a play last night will be up there with Polanco’s fall – the moment wasn’t nearly as big, and the fall wasn’t nearly as spectacularly bizarre – but it sure is hard to explain what happened to first baseman Josh Bell on this play:

@TheBlogfines can we just take a moment and laugh at Josh Bell? pic.twitter.com/DdijjQyw67

The culmination of a great at bat by Kris Bryant was a poorly-struck pop up that should’ve gotten the pitcher an out. Because of the shift, it was trouble off the bat, though. Bell probably should have had a play, but he circles around backwards because reasons, and then tumbles to the grass.

It’s hard not to chuckle. Also, good on Bryant for hustling the whole way and turning it into a double.