Remember When Kyle Schwarber Came Back from a Massive Knee Injury to Dominate the World Series? Skip to content 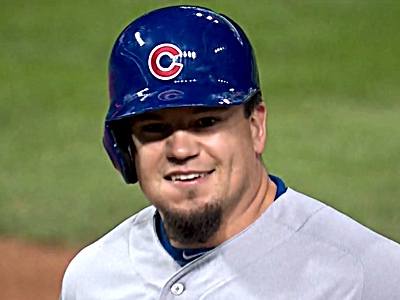 There was no story that the Cubs winning the World Series was not going to overshadow.

It doesn’t matter how large, how notable, how exceptional. No individual story was going to stand out about the week and a half in late October and early November besides the Chicago Cubs ending 108 years of championshipless meandering. Throw in the fact that the Cubs came back from a 3-1 series deficit, and then played in arguably the single most exciting baseball game in history to win the series, and it was simply going to be impossible for any one achievement or narrative to dominate the headlines.

Even if it would have totally been merited.

In another world, Kyle Schwarber is the story of the World Series. Heck, of baseball. Of the entire sports world.

To be sure, Schwarber’s near miraculous return from an ACL and LCL tear in his knee (and a badly sprained ankle, to boot) garnered significant attention. When the Cubs revealed that Schwarber would be playing in the Arizona Fall League just before the World Series and we reasonably speculated that it was in order to see if he could appear as the DH in the World Series, it was the single most-read post at BN in 2016. So deep was the surprise and joy.

But the shock of that story did little to prepare us for the reality of his return; a return from more than six months of baseball-less rehab, and work against machines that are not Corey Kluber or Andrew Miller.

In retrospect, it was absolutely nuts to think Schwarber could contribute meaningfully. And it was something we routinely said when the topic of a Schwarber World Series return came up again and again from conspiracy theorists in the summer months: even if Schwarber were physically able to swing a bat with the torque necessary to be effective, it is implausible to think that he could just pick up a bat after such a long layoff and do it against the best pitchers in the world.

Kyle Schwarber does not respect implausible. Nothing is nuts.

The Cubs announced that Schwarber would be on the World Series roster, and from thing one, it was clear just how much they believed in his return: as the DH, Schwarber batted right in the heart of the order in Game One of the World Series.

If there was rust, I didn’t see it. Although Schwarber struck out twice in the game, both were good at bats. He also worked a walk against Andrew Miller, and nearly took Corey Kluber out to right field with a double off the wall.

Schwarber would go on to post a .412/.500/.471 over 20 World Series plate appearances. He scored a couple. He knocked in a couple. He was a tough out every time he came to the dish. For good measure, he legged out an infield single and stole a base in Game Seven. He singled to lead off the 10th inning of that game, generating the baserunner that would give the Cubs their final lead in the very World Series game that ultimately overshadowed just what he’d accomplished.

But the Cubs won, and now Schwarber’s story is inextricably linked and intertwined with the most positive story in team history. That’s not exactly a bad thing.

What happens next for Schwarber remains a somewhat open question. The sample in the World Series was small, work to improve defensively in left field remains, and missing a year of offensive development may not be entirely meaningless.

But now that you’ve seen what he did in October and November, after missing more than six months, is there *anything* you would rule out for 2017?