It feels appropriate in the off day following a David Bote walk-off win to talk about infield non-prospects. After all, Bote is just three years removed from being considered an afterthought (an “org guy”) in the Cubs minor league system by outside pundits. This Cubs team has a few that graduated from that distinction: Willson Contreras, Taylor Davis, Pedro Strop, etc.

Baseball is not quite a meritocracy – pedigree buys an awful lot of opportunity – but there is something beautiful that happens when long-shots make the most of their chances. For example, a couple years ago, Ian Happ is promoted from High-A to Double-A, so Bote gets the Myrtle Beach Pelicans second base job, hits .351 over 65 games and here we are. While I will no doubt use this space to mostly spout on about the Cubs “top” prospects, it is the grind happening on the bottom of the totem pole that I have a soft spot for.

Right now, at each of the top three levels of the Cubs system, there is an infielder with an unlikely story tearing the cover off the ball. And even if these hot streaks are nothing, even if they return to anonymity soon, I want to highlight how they are buying opportunities for themselves. Right now, with a 20 PA minimum, these are your top 3 hitters in the Cubs system in wRC+.

This is what Brett wrote three weeks ago when the Cubs signed Machado: “It’s a move that bolsters the Cubs’ AAA infield depth, but does so at a time when they arguably didn’t need any bolstering.”

He was right, the Cubs had to be feeling good then about infield depth. Cristhian Adames was perhaps the Cubs best player in Spring Training, and Zack Short had done enough to win the everyday shortstop job. Trent Giambrone was going to get innings there. Things at the big league level looked solid, plus Addison Russell would be returning eventually. Why the need for Machado, a slick-fielding, awful-hitting shortstop, just days before the season?

We don’t know the answer for that, but it sure looks good in hindsight. Zack Short is on the Injured List indefinitely after being hit in the hand with a pitch, and Adames missed two weeks with injury recently. This opened up an everyday job for Dixon Machado, and here on April 22, he has the system’s best wRC+ off a bonkers .362/.508/.617 batting line.

While we have to remember that Triple-A’s new juiced baseballs are in play here, it’s still noteworthy that Machado, 27, has been the Pacific Coast League’s best shortstop by a wide margin. And he’s doing this despite his highest groundball rate since 2011. Machado, who generally has seen about 2-3% of his fly balls go over the fence in his career, has a 27.3 HR/FB% this year. Regression is coming. Machado’s batted ball profile has not really changed (he’s actually above his career average in groundball percentage), but he’s pulling the ball a career-high 61.5% of the time. Check out his spray chart entering yesterday’s game: 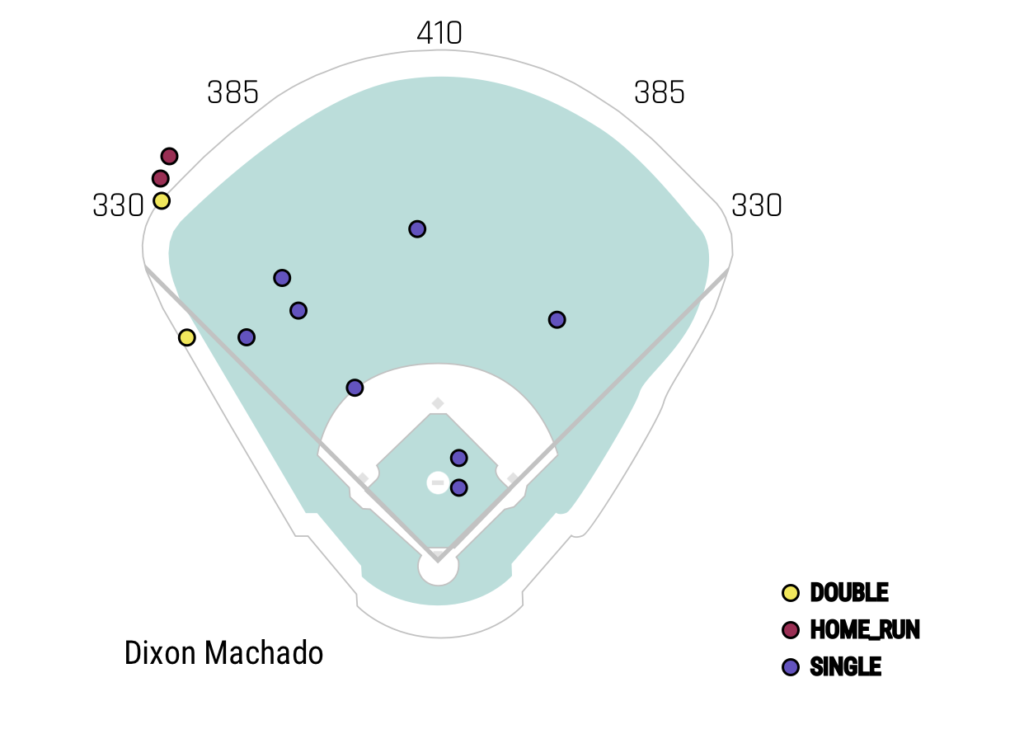 Where we go from here is anyone’s guess. Adames is now back, and next series, Addison Russell will begin his conditional assignment with the I-Cubs. At some point closer to summer, Zack Short will return, and perhaps Nico Hoerner will be pushing for a promotion. However, you can bet that at the least, Iowa manager Marty Pevey won’t find himself able to remove Machado from his lineup for the near future. And in an emergency scenario, the Cubs will have a little more comfort in their number four option at shortstop.

I love this story. Garcia last played professional baseball in 2013 in the Cleveland Indians organization. In 2016, as far as I can tell, his career took him to Italy of all places. Garcia was given a spot this fall on the Italian national team, playing well in a European tournament called the Super 6, and then in the Italian team’s tour of the MLB Instructional League in Arizona. The Cubs scouted him sometime during that run, and he was quietly their first free agent signing this offseason.

Garcia, 26, is a short but strong switch-hitting utility infielder, and he impressed in Spring Training with a compact but powerful swing. He earned a job on the Tennessee roster, and in fact an Opening Day start at third base. Garcia went 3-for-5 with a double in that one, but was injured in the game.

When he returned, though, the deck had actually been reshuffled in Garcia’s favor. His chief competition for playing time, Vimael Machin, had been moved up to Iowa following the aforementioned injuries to Short and Adames. He homered in his first two games back. He now has as many walks as strikeouts (four) through 21 plate appearances. He’s hitting .375/.476/.875, and leads the system with a 287 wRC+. He is hitting the ball in the air 75% of the time; he’s pulling it 67% of the time.

Check out his double from Saturday at the 1:18 mark of this video:

SmokiesCenter 4/20 vs Chattanooga: Rain didn't damper the night for the Smokies in their series opener against the Lookouts pic.twitter.com/gZNOakqKmm

Obviously, this is an insane hot streak. It might just be that. But Garcia is now an immovable fixture in the heart of the Smokies order, and you can expect the Cubs will start testing what else he can do. He played some center field in Italy, maybe he’ll trot out there a few times. Maximizing his utility will be paramount into turning this hot streak into a greater opportunity. I like his swing enough to think he might be worthy of it.

A 30th-round draft pick in 2017 from Mercyhurst College, where he’d hit .367/.500/.698 in his final season. Last year, the Cubs spent the spring testing Balego’s mettle behind the plate, probably as much for the leadership skills he’d shown them as his physical profile.

The experiment didn’t go particularly well: he was 3-for-31 in throwing out runners, and allowed 4 passed balls in 88 innings. He was a bit of an afterthought for me after posting a .583 OPS in South Bend.

Balego, 23, was named to the Pelicans initial 2019 roster, but when they cut down to 25 on Opening Day, he was the odd man out. Ten days later, Grant Fennell got injured, and Balego stepped into that hole. He has started all six games since returning to the roster and enters today hitting .333/.409/.611 with 8 RBI, which ties the team lead. You can see his double at the :08 mark in this video:

Balego is yet to play an inning at catcher, so I think we’re left to assume he’s back to a bench infield profile. He’s played first and second base so far, though I’m sure more positions will be coming. Balego is a good contact hitter with gap power. The Pelicans season has turned around from a win-loss perspective since adding Balego, so if nothing else, we can root for him giving some protection in what had been a punch-less lineup for our top prospect, Miguel Amaya. But like all these guys: maybe – just maybe, even if probably not – there’s something more.