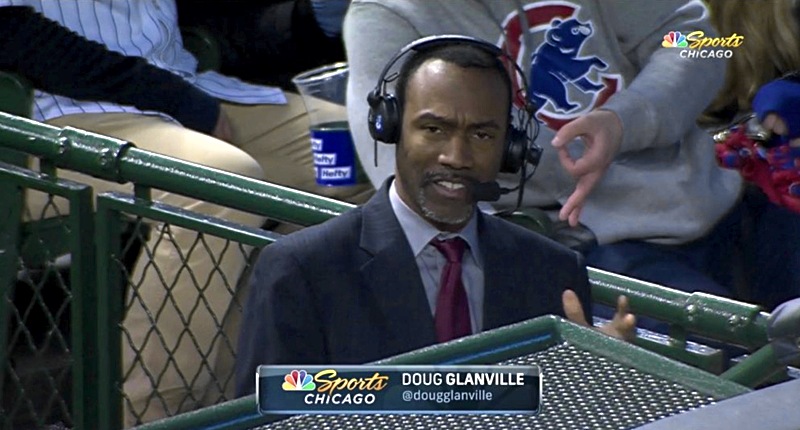 During last night’s broadcast, a fan who found himself in a live shot behind Doug Glanville, and he did what so many do when in that situation, playing around with the camera.

But where the fan separated himself is that he went to some effort to make sure to get a particular hand sign into the shot:

Am I seeing things or is this jack wagon behind Glanville flashing the white supremacy sign? @SarahSpain @BleacherNation pic.twitter.com/6p7d79vIVR

As Chad notes, that “OK” sign has in recent years become associated with “white power,” though it is admittedly a complicated topic, as Craig Calcaterra well outlines here. In short, although the sign was originally grabbed by trolls who wanted to make people think an otherwise long-used and innocuous sign was actually a racist gesture, it was then subsequently adopted by actual racists. There’s also the matter of the symbol, in this instance, being upside down, which makes it kind of look like the “circle game” thing (if someone makes you look at the circle, they get to punch you or some such thing – it’s been a couple decades since I played … ). The way the video played out, I tend to think this was not a “circle game” situation, though. And obviously the fact that this symbol showed up behind an African American reporter makes it all the more suspicious.

The Cubs sent a release after the game, and they will be investigating the incident:

We are currently investigating an incident that occurred during the Cubs’ May 7 broadcast on NBC Sports Chicago while reporter Doug Glanville was on the air. An individual seated behind Mr. Glanville used what appears to be an offensive hand gesture that is associated with racism.

Such ignorant and repulsive behavior is not tolerated at Wrigley Field. We are reviewing the incident thoroughly because no one should be subjected to this type of offensive behavior.

Any derogatory conduct should be reported immediately to our ballpark staff. Any individual behaving in this manner will not only be removed from the ballpark, but will be permanently banned from Wrigley Field.

After an investigation, I hope the Cubs release the results of their findings. There are other shots during the game that will make the fan easily identifiable, so the Cubs will have the opportunity to discuss this incident with him. If this is what it looks like it was, we can’t let this kind of thing stand, continuing to creep into the national discourse like it’s all OK. Put yourself in the shoes of a minority Cubs fan – for just one example – and think about how you’d feel if an incident like this was treated as no big deal, it’s just a joke, I’m just trolling, etc. Not acceptable, and the fan should not only be banned, but the Cubs should also make all information they ascertain publicly available.

That said, we can let the investigation play out. There are conceivably innocuous explanations for what happened, even as bad as it looked, because of the complicated nature of that particular hand symbol.

UPDATE: No details yet, but it seems the Cubs believe the intent “more likely than not” was racist:

#Cubs were made aware of the hand gesture incident by viewers who notified the team on its social media accounts, Crane Kenney says.

A group of Cubs officials met and reached conclusion it was "more likely than not" the fan was using the gesture as a racist symbol, Kenney says.

"If it's just really, really poor judgment" on the part of the fan who made the gesture, the #Cubs still lean toward permanently banning him from Wrigley Field, Crane Kenney says.

Cubs believe burden of proof is on the fan to prove he wasn't using a racist symbol, Kenney says.

#Cubs' Crane Kenney on hand gesture incident: “We’re airing on the side of protecting the enjoyment of all fans whether they’re viewers watching the broadcast or folks in the park.”