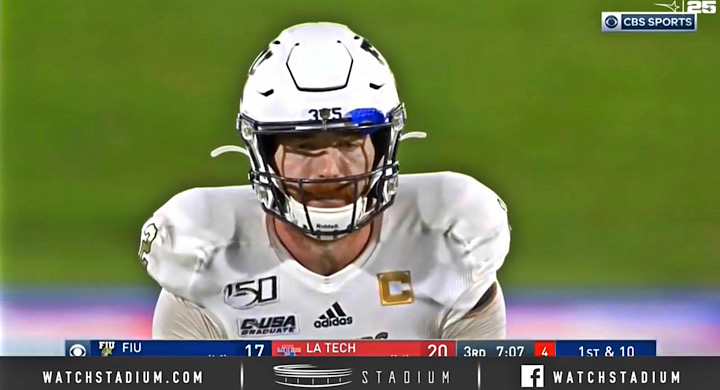 “It’s easy to tell that the Green Bay native favors quarterbacks like Brett Favre and Aaron Rodgers when you watch his tape. Unfortunately, while he has similar zip to the Packer legends, he’s nowhere near as accurate and lacks any semblance of touch.”

Morgan’s draft stock has been on a considerable climb for quite some time, but the Bears were in on the ground floor of the movement as they were among the first to meet with him at the East-West Shrine Game. In March, the Bears were again connected to Morgan as a team that was “closely vetting” the Wisconsin native.

With Mitch Trubisky and Nick Foles set to duke it out for the starting job in Chicago, Tyler Bray enters the 2020 season as the unchallenged incumbent QB3. But there is a sense the Bears could use the later rounds of the draft to unearth a developmental project for the third quarterback gig. And if the Bears decide not to use a second-round pick on a prospect like Jake Fromm, Jalen Hurts, or Jacob Eason, that would leave Morgan as a possible late-round fit.

Morgan checks plenty of boxes as far as late-round fliers are concerned. He has big-time arm talent, plays a fearless brand of football, has shown a willingness to go gut it out through injuries, and has a certain level of swag in his game. Morgan certainly has weaknesses, with Lance Zierlein of NFL.com pointing out Morgan’s accuracy, mechanics, and pocket mobility as major things that need to be tightened up. But that’s why Morgan is in this spot in the first place.

If the Bears are able to use earlier picks in the draft to fill bigger needs, then Morgan could make sense as a long-term project for Matt Nagy, John DeFilippo, and Bill Lazor to work on behind the scenes while Foles and Trubisky push for a starting gig.