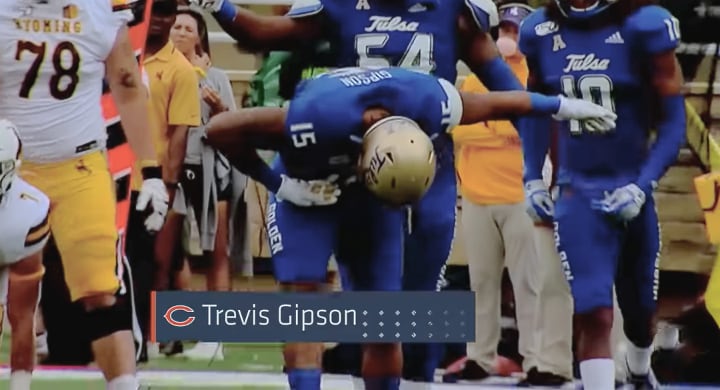 Making a trade with the Minnesota Vikings makes me itchy. All intra-divisional trades do.

But if Trevis Gipson fills out and pans out, it will be the Chicago Bears getting the last laugh, as far as this draft-day trade is concerned.

•  “First step is long and explosive” …  That’s exactly what I want to hear about a pass-rusher.

•  “Has tools for dangerous stab-and-run bull rush” … I like the sound of that, even if opposing offensive linemen might not.

•  “Added nearly 60 pounds at Tulsa and got better each year” … You’ve gotta love a player continues to grow year-after-year.

• “Talented but still very raw” … In all honesty, I would expect nothing less from a fifth-round pass-rusher out of Tulsa.

•  “Plays at full speed but technique is behind” … Again, this is to be expected when you’re dealing with a late-round pass-rusher.

•  “Inefficient movement with arms and legs flying all over” … Sounds like a prospect who needs to be molded. Luckily, he’ll get to learn behind Khalil Mack and Robert Quinn.

Even though the Bears signed Robert Quinn to start opposite Khalil Mack and added Barkevious Mingo to bolster the depth, there was still room for another edge rusher in the room. Ideally, a prospect would emerge on draft weekend as someone who could fill the No. 3 EDGE role in a way that Aaron Lynch did when he first arrived in 2018.

I’m not sure Gipson is that guy at the moment, but he certainly has the tools to develop into that type of player. And because he’ll settle in behind Mack, Quinn, and (possibly) Mingo, Gipson will be in a position to get some valuable on-the-job training.

Gipson has some loud tools and upside. Roy Robertson-Harris is his pro-comp, and that’s certainly encouraging, especially if you’re familiar with how the Bears helped re-shape his body and athletic profile. If they can do the same with Gipson, then they’ll have someone who can contribute in a solid way as early as the 2021 season.