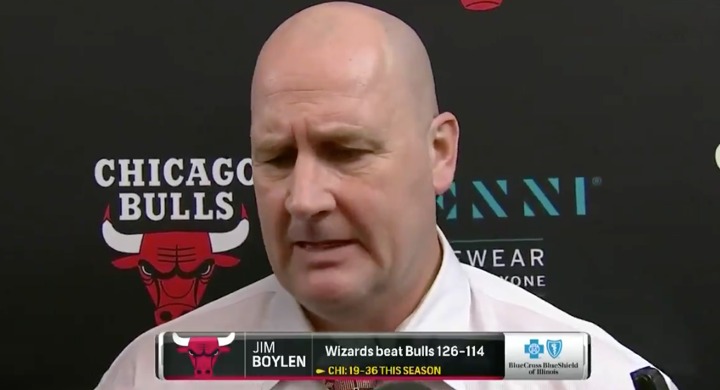 On September 30th, 2019 – Jim Boylen, John Paxson, and Gar Forman sat in front of the world on Media Day and identified a playoff berth as the season’s task at hand.

“Our goals for the season,” Boylen told reporters, “are to make the playoffs and every day to prepare like we’re a playoff team.”

On Tuesday evening ahead of the Bulls matchup against the Oklahoma City Thunder, 670 The Score’s Cody Westerlund asked Boylen about his 37-79 record as an NBA head coach.

“I’m not worried about my personal record or my win-loss record,” Boylen told Westerlund. “I’ve been asked to establish a style of play, to have a disciplined approach and develop a young group of guys. And in my opinion, we are doing that.”

Huh? Last time I checked, the win-loss column is a pretty important component of making the playoffs. Not to mention, for a franchise in the third year of its rebuild, the “style of play” and general culture should be well established by now.

But what really gets me going here is that Boylen is either (a) pretending or (B) genuinely happy with the way things have gone so far. I’m not sure which is worse.

Who wouldn’t want to live in this – for lack of a better word – fantasy land?

Boylen is doing a great job – according to him – and, hey, it isn’t even his job to care about the final record, right? “It is hard for me,” Boylen said (via Westerlund). “But that’s not my calling. That’s not what they ask me to do. Nobody in this organization said to me, ‘You got to win this many games.’ … Not one time have they said that to me. That doesn’t mean we don’t want to win.”

Excuse me? Did an NBA head coach just say winning games isn’t what he’s asked to do?

The reason Boylen is allowed to think this way and not worry about his dismal coaching record is because the front office allows it. He’s so entirely confident in his current position as head coach, he told Westerlund he’d be surprised if his win-loss record was used against him this offseason.

Jim Boylen says #Bulls management hasn’t once said he and the team need to win a threshold of games. The focus is on establishing a culture.

So would Boylen be surprised if poor win-loss record is used against him at season’s end?

If Boylen’s been ensured that the team record wouldn’t be used against him, that means this organization never really cared (word of the day) if they made a trip back to the playoffs in the first place. Either this is true or Boylen and his front office are on very different pages.

As the season has gone by, Boylen has acted more and more like this is Year 1 of the rebuild. The pressure isn’t on, and his job is to build this thing from the ground up. Meanwhile, “playoffs” has been an empty word thrown around to keep the fans entertained. Unfortunately – as you can tell by the tone of this post – we are not.

Anyway, here’s a bit more of what Boylen had to say today:

Jim Boylen is 37-79 (.319) in his #Bulls tenure. Here’s his full response to an initial question on how much he concerns himself with his win-loss mark: pic.twitter.com/cpsEp3rzSg