How to Beat Brady, Mic'd Up Mooney, Quinn's Comeback, and Other Bears Bullets Skip to content 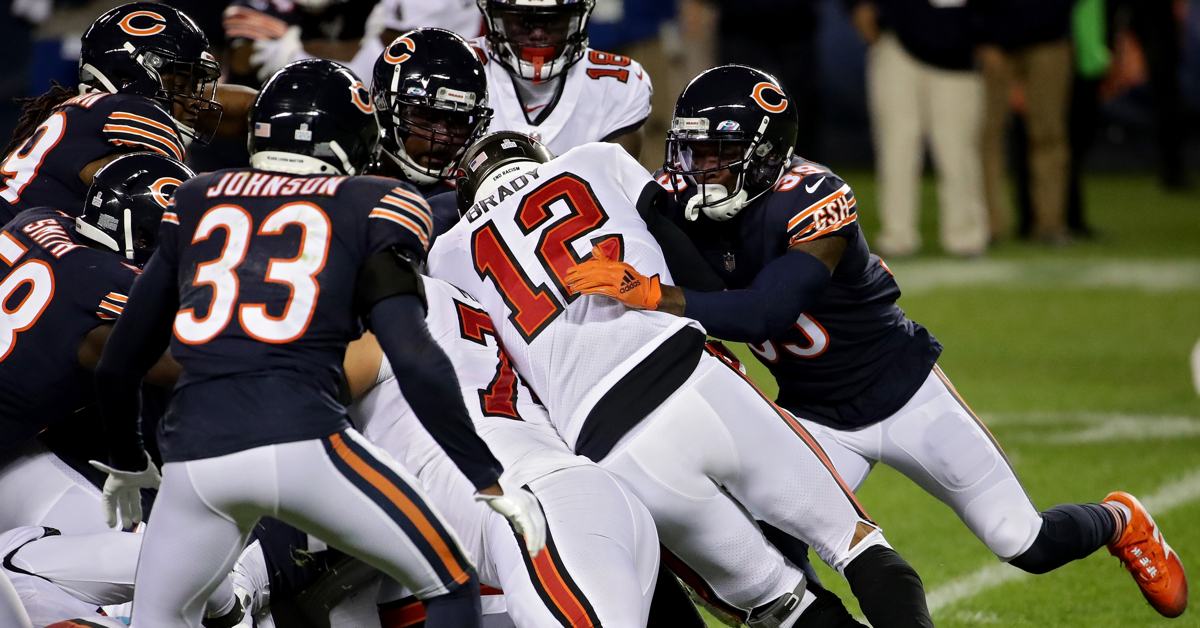 It’s nice to have the NBA (and Eli’s coverage of it at BN Bulls) back in the full swing of things. Mid-week basketball does so much to help me pass the time between Bears Sundays. And I imagine it will be quite helpful with the Bulls being far more entertaining than they’ve been in some time.

•   Matt Nagy was unsure if Robert Quinn would be eligible to come off the Reserve/COVID-19 list in time to play on Sunday. If Quinn can, then this snippet shows what he brings to the table:

What a start to the year by Robert Quinn. There's very few more talented, skilled, or enjoyable edge-rushers to study when they're 'on' than him. Excellent explosiveness, hands to soften the edge, and still bends like Gumby around the corner. pic.twitter.com/gF8OLRsn1Z

•   Quinn’s resurgence is one of the biggest stories of the year for the Bears. In addition to falling short of expectations in the first year of his new contract, Quinn had some injury issues to work through in the offseason. Those concerns had been silenced through the first six games of the season. And as Brandon Thorn mentions above, there are few pass-rushers as enjoyable to watch work as Quinn. This is the type of action we thought the Bears would be getting upon arrival. I’m sure some combination of Trevis Gipson, Christian Jones, Sam Kamara, and whatever else DC Sean Desai can throw into the mix can do a bang-up job if Quinn can’t go. But that battle is an easier one to fight when Quinn is healthy.

•   Not that you didn’t already know, but Chicago’s best shot at beating Tom Brady is by pounding away at him. Come off the edges with Quinn and Khalil Mack. Collapse the middle of the pocket with Eddie Goldman, Akiem Hicks, and Bilal Nichols. Send Roquan Smith once or twice just to throw in a fresh wrinkle. This all falls under the easier said than done umbrella, especially with Quinn unavailable and the Hicks/Mack tandem not practicing. But at least the blueprint is there for the talking.

•   The other key to beating Brady lies on the other side of the line, where The Athletic’s Adam Jahns underscores Jason Peters’ re-emergence as a reliable force at left tackle:

A look at how signing Jason Peters has become a positive for the Bears and their line.

The numbers (I present a lot of them), the film, the coaches, the players all agree on this.

•   Things looked rough for Peters during that Browns game. Then again, Myles Garrett can make a lot of tackles look like they made a questionable career choice to get into that line of work. But in the games that came before and have come since, Peters has been a surprisingly stabilizing force. Don’t you just love surprises?

•   On the one hand, it is commendable that the Bears were able to pull a starting left tackle off aa fishing boat in August, get him into playing shape, and have him be a solid contributor pretty much upon arrival. All of that coming together takes luck, knowledge, relationships, player desire, and so many more variables. So I don’t want to short-sell it. However, on the other hand, that one of the Bears’ most important players is a 39-year-old tackle pulled out from the abyss isn’t great. And it’s certainly telling that they needed to do this in the first place.

•   Mic’d up Darnell Mooney was a treat:

•   Officiating, last week, however, was not:

•   Referees are humans, too. So I suppose we can cut them some slack on that level. We all have bad days, right? It’s just that you’d prefer those days to not happen during the NFL’s best rivalry. Or at minimum, not make it look so clunky. The officiating seemed disjointed and a step slow to make decisive calls. Everything felt a bit off, as if it was a glitch in the simulation. In any case, it’s worth noting that NFL grades its officials and puts its best ones on the field for the postseason. So while it’s just one game, who knows how much an official can be dinged in terms of grading for postseason work.

•   Maybe I’m putting the cart ahead of the horse, but seeing this clip makes me think Justin Fields will be SPECIAL:

Justin Fields is going to be so damn good. pic.twitter.com/PFcqrztg6j

•   Bears fans have seen it on so many occasions in similar clips where their favorite team’s QB crumples at the first sign of Packers pressure. And then said QB is never the same. But to see Fields wiggle out of the jam, then gain yards on the ground fills me with hope.

•   Knowing that Razor Ramon cut a promo with Walter Payton made my day that much better:

•   At least one Bears-Packers game each season should feature *BOTH* teams wearing throwback jerseys:

The Packers will be wearing their 1950’s throwback uniforms this Sunday against Washington and they are excellent. pic.twitter.com/AR5vjGCLs0

•   Nick Saban showing human emotion for a change is a nice touch:

•   Tons and tons of watches are your Epic Daily Deals at Amazon. #ad

•   Last night’s Bulls game was like if a taffy pull broke out at a rock fight. But they won, which is what is most important:

•   If the Hawks don’t turn it around soon, we’ll find ourselves with far more interest in what is happening in the land of prospects:

•   Seems like a good offseason to be doing homework on elite free agent shortstops:

Cubs Have Reportedly Been Doing Their Homework on the Elite Shortstop Free Agent Market – https://t.co/xW8rdn8uCw pic.twitter.com/YsNU2sgSOq