Meet the 2022 Chicago Bears: Good Luck Picking a Starting 5 for the Offensive Line Skip to content 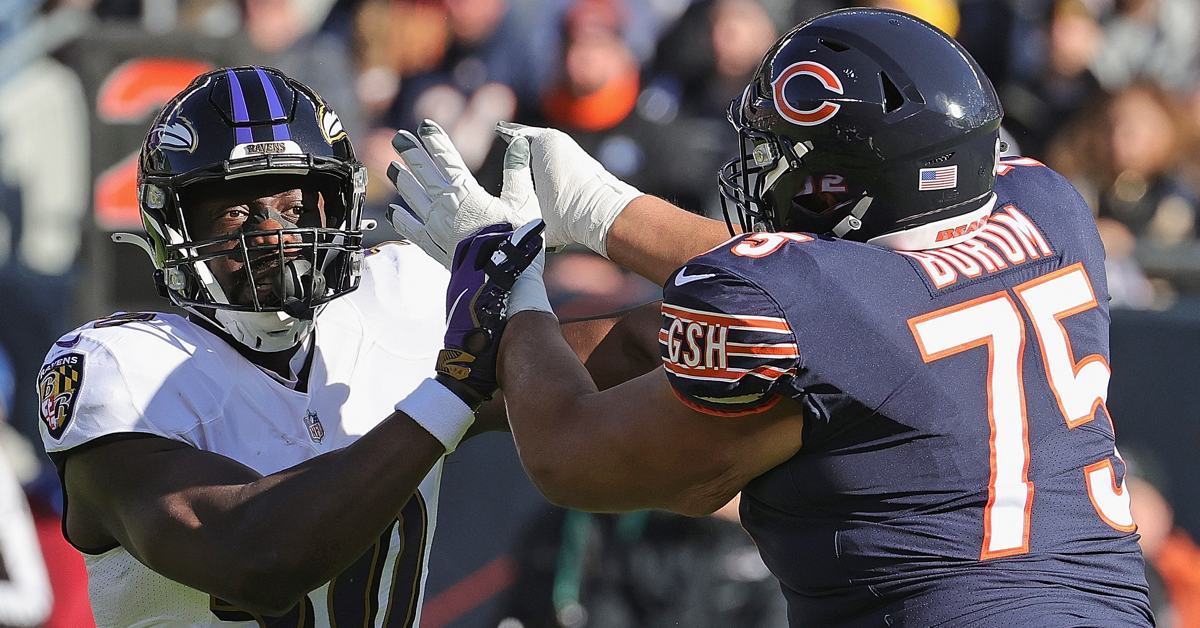 Training camp begins this week! And with it, a new era of Chicago Bears football. Matt Nagy and Ryan Pace are long gone, leaving the franchise to usher in a new Matt (Eberflus) and Ryan (Poles) in their place. Halas Hall is the place to be this summer as the new guys prepare for the 2022 season with practices and workouts. So, let’s take a look at who’s on the team right now as things get into gear.

An educated guess at Week 1 starters:

*-Schofield Is reportedly signing with the team today.

Holy smokes, there is a lot of ground to cover here. And that’s without diving deep into Schofield’s signing. Chicago’s football team has nine new offensive linemen on its roster. Braxton Jones, Ja’Tyre Carter, Doug Kramer, and Zachary Thomas are rookies who came via the draft. Lucas Patrick, Julién Davenport, and Dakota Dozier were notable free agent signings with prior starting experience. Meanwhile, Willie Wright (Ryan Poles’ first signing!) and Shon Coleman were under the radar free agent additions.

And let’s keep in mind there is even a new guy coaching the group with Chris Morgan in his first year as the Bears’ OL Coach.

Teven Jenkins and Larry Borom are second-year players returning from last year’s team, but neither has a clear path to a job. Jenkins looked primed to be the Bears’ left tackle of the future at this time last year, but enters camp in 2022 as the second-string right tackle. Borom, who coaches from the prior regime believed had potential to be a starting left tackle, began the offseason training program at left tackle before sliding over to the right side. Neither player has guarantees from the new regime that they’ll start, but one (if not both) could be in the starting five when the season begins.

I’m high on… Braxton Jones as a starter in this lineup. Day 3 picks don’t usually start as Week 1 rookies. But Jones gives off some real Charles Leno Jr. vibes, in that he is a late-round pick who comes to town with a good amount of starting experience and some raw, moldable skills. What makes Jones different than Leno is that Jones has desirable measurables that Leno didn’t. Perhaps that is enough to give him a leg up on the competition. Frankly, I wouldn’t be surprised if he was the Week 1 starter.

I’m worried about… literally every piece of the offensive line. Both starting tackles are major question-marks. And even when they are settled, I’ll probably still have questions about each player’s floor and ceiling moving forward. The interior line trio is led by a player coming off a down year (Cody Whitehair) and a pair of versatile swing lineman (Lucas Patrick, Michael Schofield) who join Chicago as short-term stop-gaps. Maybe I’d feel better if the Ryan Bates plan had been properly executed, but the Bills threw a major wrench in those plans.

Even after the Schofield signing, I have no idea who I can trust protecting Justin Fields this year. And it bothers the heck out of me.

I’m totally digging the volume plan this front office put in place on NFL Draft weekend that led to a handful of picks who enter their first training camp vying for a starting job. There are few things as enjoyable as watching an honest to goodness open competition play out in the trenches. And that’s what the Bears have with Jones, Kramer, Carter, and Thomas jockeying for position against each other and returning players such as Borom and Jenkins. If you ever get tired of obsessively watching Justin Fields, keep an eye on the offensive linemen.