Kudos to the NBA on Restart Plans, Tanaka Reactions, Felicio's Money, and Other Bulls Bullets Skip to content 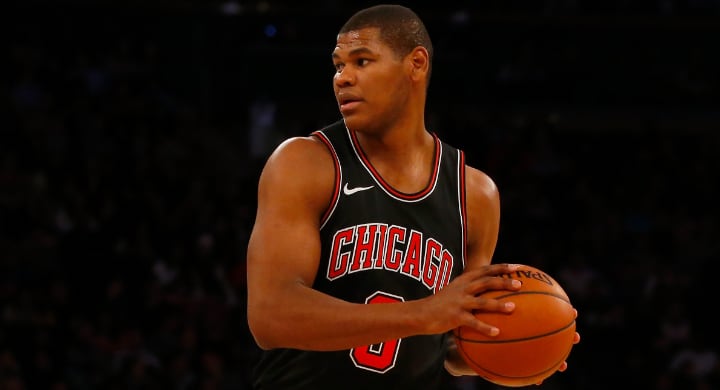 I’ll be moving to a new place in about a month (Michael: Tell them what city, you coward (you won’t like it Cubs, and Bulls fans)), and I’m thinking about having some sort of stand or table where I can display all my best baseball/basketball/football cards in a cool way. I literally have so many sitting on my desk and in my closet, and I’ve always wanted to do something better with them. I’m also thinking I could put them all in sleeves and make a coffee-book style thing. I don’t know.

If anyone has any good ideas, let me know!

•   Can we keep this whole positive news thing going? Yesterday, we got several updates on the state of a possible NBA resumption, and all signs are pointing in the right direction. We outlined all the important information in our post below:

Let’s Go: NBA Working on Timeline That Would Resume Season in Julyhttps://t.co/QrvjyZJ6uS

•   The plan is reportedly to have live basketball for our eyeballs by mid-July. The entire month of June could hopefully be used as a training camp of sorts, with players returning to their respective cities and slowly beginning a return to normal contact practices. Like many, I’m still concerned about a ton of logistical channels, especially when it comes to proficient and morally justifiable testing. However, I guess if we have anything to ease our nerves, the NBA has handled the re-opening of team facilities pretty well so far. We have yet to hear of any new cases in the NBA community, and 18 teams around the league currently have their facilities open in some capacity for players (the Bulls not yet included). And we got an idea of what the inside of these facilities look like thanks to that Kevin Love piece from ESPN that we shared a few weeks back. I expect nothing less from the NBA, but they’re so far (1) taking this slow enough and (2) taking the precautions. The more people, the more obstacles, but if Commissioner Adam Silver does encourage teams to reconvene on June 1st, I feel decently comfortable it’ll be handled as well as it can be.

•   Arguably the biggest thing to come from yesterday’s reports was the fact ESPN’s Adrian Wojnarowski actually wrote the league’s next steps will act as the “formal ramp-up for the season’s resumption.” It’s the first time we’ve head anything this definitive, and he doubled-down on this earlier today on Get Up:

"The NBA and its teams expect they're going to return this season and play."

Will they play regular season games? Will all 30 teams be brought back? Play-in tournament?@wojespn with the latest: pic.twitter.com/88eayJYO7z

•   Happy? I saw many Bulls fans rejoice yesterday, and while I understand the reaction, I’ve heard nothing but awesome things about Tanaka. He’s certainly a respected mind in the NBA community and may be a victim of circumstance, but I ultimately agree his time with this organization has run its course. The Bulls injury trouble has been all too frustrating, and a fresh start in this area of the organization feels necessary.

•   Cristiano Felicio will forever be a name that when spoken, forces Bulls fans to yank out a chunk of hair. The now-fired Gar Forman gave the reserve center a four-year $32 million contract back in the day, and The Sun-Times put in perspective well how ridiculous the money he’s making is: “Three seasons later, Felicio is a seldom-used reserve making more money than starters like Kris Dunn, Wendell Carter and Lauri Markkanen. Heck, Clippers super-sub Lou Williams was pulling in 100 grand less than Felicio this season.” Dear lord. Fortunately, the Bulls will only have the big man for one more season, and it’ll open up a nice chunk of cap space for Karnisovas to work with (especially when you factor in Otto Porter and Luke Kornet’s expired contracts). In general, it’s always reassuring to remind yourself that the Bulls should be real players in the coveted 2021 free agency. Karnisovas and general manager Marc Eversley will have the money to sign a big fish. The question will be whether they can do what the previous front office couldn’t and reel that player in.

•   Coby White answered some of the Twitterverse’s questions yesterday!

Earlier today, @CobyWhite of the @chicagobulls checked in to answer questions! #NBATogetherhttps://t.co/7ECcqkbari

Once upon a time, you could walk into the Deerfield Multiplex and watch Michael Jordan’s Bulls practice. @jon_greenberg spoke with a photographer who did just that: https://t.co/6gd8v1hrQj

We're at the point of quarantine where we tweet Adam Mokoka highlights pic.twitter.com/2dnkKMb4xp

•   By the way, did anyone catch Game 6: The Movie on ESPN last night? I think the network certainly oversold the product, but I still thought it was pretty cool. Not only is Game 6 always worth a watch, but it was fun to see such an iconic game in a different way. With that said, I wouldn’t want to watch many games that way … the camera angles could be a tad jarring.

•   I feel like I’ve taken a basketball to the face literally every single day in 2020.