Shaheen on His Way Out, TE Concerns, Draft Hits and Misses, and Other Bears Bullets Skip to content 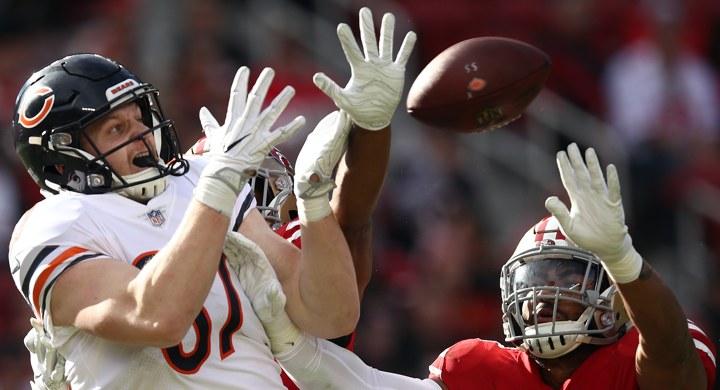 Living through a pandemic has its challenges, but the lsat few months have allowed me to grow closer with my neighbors. So much so, we had Thanksgiving in July on Saturday. There were all sorts of grilled turkey and ham, desserts, drinks, and contributions from everyone. Even in trying times, it’s good to take some time to remember you have friends and family for whom you’re thankful.

•   ICYMI: The great tight end purge continued on Saturday with the Bears reportedly trading Adam Shaheen to the Dolphins. It’s a move that came shortly after the team released Ben Braunecker. Once the dust settles and the trade becomes officially official, Chicago will be left with seven tight ends. And what’s most impressive (at least, I think it’s impressive) about this turnover of the position group is that it leaves J.P. Holtz as the longest-tenured member in the room.

•   Equally impressive is that Chicago was able to get something for Shaheen. It’s a conditional sixth-round pick. But details as to how the deal could vest were not disclosed, so that leaves it up in the air. And Shaheen disappointed at every turn in Chicago, which puts doubt in my mind that the Bears will actually get that pick. Nevertheless, getting someone to agree to a trade for a disappointing player when the writing was on the wall that his time in Chicago was nearing its end is borderline magic. Ryan Pace has his share of head-scratchers, but this gets a tip of the cap from me.

•   Sigh. Remember when we were excited about Adam Shaheen? We weren’t alone.

I’d like to have that draft report back. Here’s hoping for a fresh start! https://t.co/5BlKOzGVou

•   Here is said draft report from the night Shaheen was taken:

•   To be fair to NFL Network draft guru Daniel Jeremiah, he wasn’t alone in his dreaming big on Shaheen’s upside. Bleacher Report draftnik Matt Miller ranked Shaheen in his top-5 tight ends, writing: “Athletically, it’s not crazy to see some Rob Gronkowski here.” In an April mock draft, ESPN’s NFL Draft experts Mel Kiper Jr. and Todd McShay had Shaheen going 51st overall to the Broncos. And when the dust settled after the draft, McShay said Shaheen was the Bears’ best pick. He even gave Pace dap for not taking Shaheen at No. 36, trading down, picking up another fourth-rounder (who turned out to be Tarik Cohen) in the process. Shaheen’s size, skill, and domination of lesser opponents led him to be one of the highest-graded tight end prospects in the 2017 NFL Draft. Sometimes, those guys simply don’t pan out.

•   I suppose the most frustrating thing about the Shaheen era is the talent, upside, hope, hype and optimism surrounding him never fully surfaced. And that buzz came from respected names in the NFL Draft community only makes things sting more. When someone like that doesn’t live up to the hype, it becomes easy to frame the conversation in a way that makes it seem as if Shaheen was some unknown prospect the Bears reached to draft. I get it. George Kittle has turned into the best tight end from that class and went three rounds after Shaheen did. But in the moment, Chicago took an athletically gifted player who fit what people wanted out of the position. Ultimately, the Shaheen pick was a miss — which is why I still think it’s impressive that the Bears were able to get future draft capital and some cap savings via a trade.

•   Now we can look at the position without worrying if the Bears will roster Shaheen in order to justify their pick. And a brief glance at the position is that there are still concerns, even after completing a massive overhaul. Also, we’re now on three overhauls of the position group. And we’re also looking at a third position coach for the group. At some point, the guy picking the players has to wear it … right?

•   Some side notes about the above-linked April mock draft. Kiper had Patrick Mahomes as his QB3. And he also had Mitchell Trubisky (6th overall to the Jets) and Deshaun Watson (10th to the Browns) going before Mahomes went off the board (13th to the Cardinals). That mock had Kiper choosing Ohio State safety Malik Hooker for the Bears, while McShay sent Alabama defensive lineman Jonathan Allen (the No. 2 ranked overall player) to Chicago.

•  Reading this Trubisky assessment from McShay stings: “Trubisky has the natural accuracy and pocket mobility to develop into a quality starter.” Kiper raved about Trubisky’s “high ceiling.” I suppose it’s still true about the ceiling and pocket mobility, but the accuracy hasn’t been there with any consistency over the last three years. Hence, we’re set for QB derby this summer.

•   I think Mark Potash is onto something here:

Even with Adam Shaheen another glaring miss, Ryan Pace's ledger as #Bears GM isn't as lopsided as many critics think. But the QB misjudgments tilt it toward the negative.
*These lists are inexact — and fluid — but still paint the picture, I think: pic.twitter.com/tp4Zk9l1uM

•   For the sake of fairness, it can be easy to overlook the hits because the miss at the top of the list is a landscape-changer. Seeing two quarterbacks listed under the misses is damning, to say the least. How important is a quarterback? Having one in the miss column focuses the conversation there when the “hits” column features three players who earned first-team All-Pro honors as recently as 2018 and five Pro Bowlers.

•   Happy birthday to a key cog in the Bears offense:

•   The rookies got their first look at Halas Hall:

Details are still emerging about the NFL/NFLPA deal: There’s a temporary IR for a COVID positive player & placement is immediate. His return is subject to medical clearance. A team may move up a P-squad player to replace him, then can return that player to the PS without waivers.

•   Big discount day at Fanatics (plus free shipping) through midnight.