Would the Chicago Bulls Ever Reunite with Bobby Portis? Skip to content 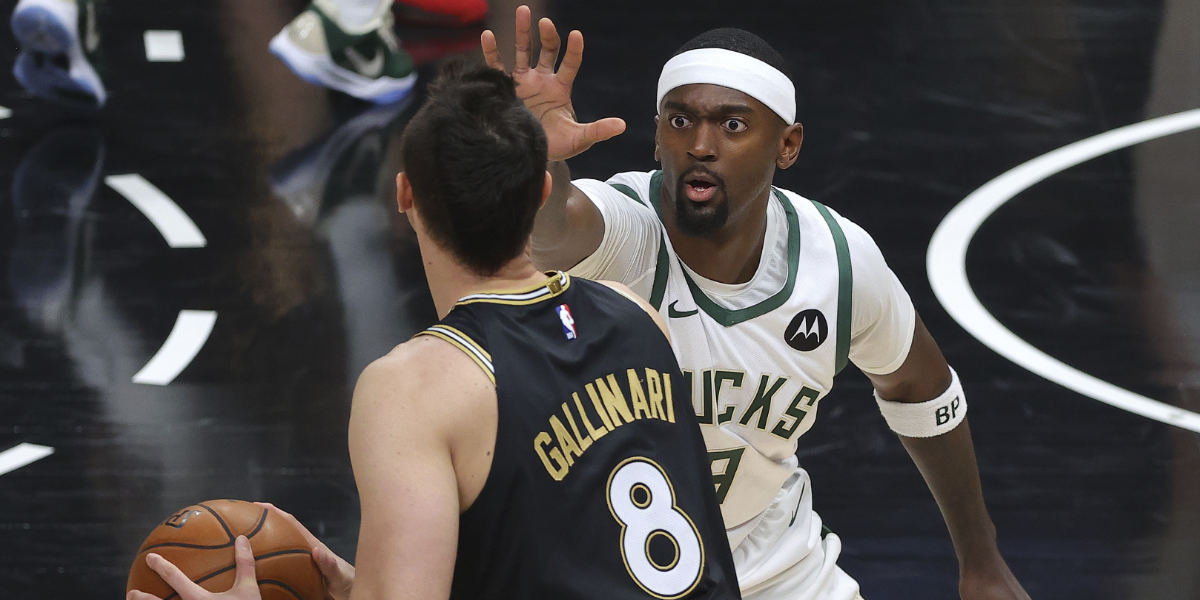 Bobby Portis has touched the postseason twice since he entered the league in 2015. The first time came in his sophomore season in Chicago when the Dwyane Wade-Bulls took the Boston Celtics six games in the first round. Portis appeared in all six contests, averaging 20.2 minutes with 6.7 points and 6.0 rebounds off the bench.

Fast forward four seasons and three teams later, and Portis is averaging 8.7 points and 5.2 rebounds in 17.9 minutes for the Milwaukee Bucks. The stat line may look similar to his 2015-16 campaign, but his actual impact couldn’t be more different.

Put simply, Portis is a big reason the Bucks find themselves battling for their first Larry O’Brien trophy in 50 years.

Bucks with Giannis and Bobby Portis together in this series:

On Sunday night, his 11 points and 8 rebounds helped Milwaukee avoid the death sentence that is a 3-0 deficit. In the series prior against the Atlanta Hawks, Portis recorded 22 points, 8 rebounds, 3 assists, and 3 steals while filling in for the injured Giannis Antetokounmpo in a Game 5 victory. He followed that up with an important 12-point, 9-rebound performance in the series clincher.

Portis might offer the same endless supply of energy, physicality, and crazy eyes that we saw in Chicago, but there is no denying things feel more calculated in Year 6. Instead of trying to make the big play and letting his emotions run rampant, Portis has demonstrated complete buy-in to his new sparkplug role. But don’t take my word for it. The man himself spoke with The Athletic about his individual growth, and he provided perspective on his NBA journey that sounded wise beyond his 26-years.

A chunk of that perspective stemmed from his time with the Chicago Bulls, a franchise he was quick to praise when reflecting on his road to being a Finals contributor.

Being drafted by the Bulls was a big-time experience for me. As a kid, we all want to get drafted to the NBA and I had a chance to play for one of the best franchises in sports. They had Michael Jordan. So to represent Chicago was an honor.

The comment can read a bit hollow when we remember that Portis turned down a four-year contract extension that would have paid him $40-50 million over four years.

However, a matured Portis has now walked back that decision. He told The Athletic that he regrets not committing longer to Chicago. I’m sure the fact he went on to sign only a one-year deal with the New York Knicks worth $15 million, followed by a two-year contract with the Bucks for roughly $3 million annually, is the biggest reason for that regret. But Portis did also mention his fit with the Bulls as a reason why he wishes things played out differently.

If I knew then what I know now, I’d tell my younger self to take the extension. It’s life-changing money, money that can set my family up and generational wealth that can provide for generations to come. I wasn’t looking at it like that. I was looking at it like, ‘Oh, I think my worth is this and that.’ But really at the time, the grass isn’t always greener on the other side. Sometimes, it works for people. I would’ve told myself to take it. I think it was a great fit for me. I had a very good connection with the Bulls. We were all connected. The city loved me, I played hard. I’m a blue-collar player. It’s a blue-collar city, it’s the Chicago Bulls.

Hmm, the latter half of that statement got me thinking: Could Portis be open to a reunion?

He may have taken a pay cut to join the Bucks in the first place (which he talks about during his interview with The Athletic), but I still have to imagine he turns down his $3 million player option for the 2021-22 season. With the 2021 free-agent market underwhelming, now would be the time to finally secure a contract similar to the one he passed up several years ago. Words like the ones above suggest Portis would be open to negotiating with his former team, and I have to imagine the Bulls would be ready to have a conversation.

Lauri Markkanen is headed toward restricted free agency, and there have been many signs to suggest he will be playing elsewhere next season.

Meanwhile, big man Daniel Theis is an unrestricted free agent who is expected to draw interest from a number of teams around the league. We also can not forget that Thaddeus Young, 33, is on a partially guaranteed deal. While it feels like the Bulls front office will look to keep him around after this strong 2020-21 season, there is (legitimately) no guarantee. In other words, the Bulls could find themselves with a serious hole at the power forward position, and Portis could be a solution worth investigating.

Not only would Portis bring the Bulls some newfound postseason experience, but he would provide a nice contrast to Nikola Vucevic in the frontcourt. While Theis is undoubtedly the better all-around defender, Portis could offer some more reliable offensive versatility while also providing the same kind of much-needed physicality around the rim.

Rather than try to eloquently transition through the rest of my Portis points (#Lazy), I’ll bullet some other reasons why he could be a big man that sparks the Bulls’ interest:

•   He had a career-high 58.1 effective field-goal percentage this season. Portis’ previous career-high was 53.1 percent in 2016-17. While some of that success likely stems from the quality of his teammates, I think it still goes to show how reliable Portis can be in this more limited off-the-bench role.

•   Portis shot an absurd 47.1 percent from 3-point land this season, including a 49 percent clip in the corner. The Bulls will play more of an inside game next season with Vucevic fully in the mix, so the more spot-up 3-point shooting they can throw into the rotation the better.

•   While Portis may not be an elite defender,  he can guard multiple positions. He recorded a career-high steal percentage this season (1.6 percent), and his individual defensive rating was the best it’s been since the second year of his career (where he also played significantly fewer minutes).

•   Adding Portis would only improve the Bulls’ already solid rebounding department. While the 7.1 rebounds per game in just an average of 20.8 minutes is impressive, we should also note he snatched the 9th-most offensive rebounds among bench players this season, per NBA.com.

I’m not trying to suggest Portis should become a free-agent priority, but he seems like a player who should be somewhere on the Bulls’ list, right? The depth at the position could be drastically impacted this summer, and the fit for Portis appears as if it could be somewhat effortless. And, hey, it’s hard not to love a good reunion tour.