2020 Bears Offseason Outlook: It Might Not Be As Crazy, But Eddy Piñeiro Expects Another Kicking Competition Skip to content 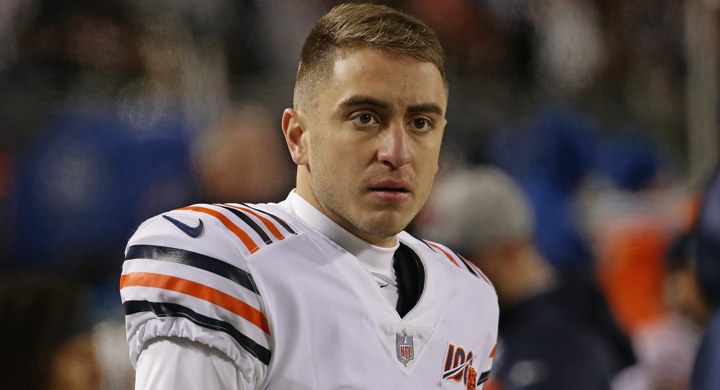 Kicker Eddy Piñeiro, punter Patrick O’Donnell, and All-Pro Cordarrelle Patterson are under contract for the 2020 season, as is punt returner Tarik Cohen, who’s set to enter the final year of his rookie contract.

Meanwhile, linebacker Joel Iyiegbuniwe – who played the second most special teams snaps for Chicago last season – is in the third year of his rookie deal.

Long snapper Patrick Scales is the only member of the kicking game trio set to hit free agency, but he isn’t the only important special teams contributor who could become a free agent when the new league year opens in March.

Four of the five players who played the most special teams snaps in 2019 are on the cusp of free agency. That group includes safeties DeAndre Houston-Carson and Deon Bush, as well as linebackers Nick Kwiatkoski and Kevin-Pierre Louis. Defensive back Sherrick McManis, who has been the gold standard of Bears special teams aces since 2013, is also about to become a free agent.

O’Donnell had an OK year as a punter in 2019 (more on that below), but how much should an “OK” year from a punter cost? The Bears could gain $1.75 million in cap space (while taking on just $100,000 in projected dead money) by parting ways with O’Donnell this offseason.

The team could also pick up $4.75 million in cap space if it cut Patterson. However, parting ways with your best special teams player – a multi-faceted ace, no less – to create a small piece of cap room doesn’t seem ideal. Especially not when we’re not even a year removed from Head Coach Matt Nagy being “like a kid in a candy store” about the potential Patterson brought to the table as a possible offensive Swiss Army Knife of sorts.

During Super Bowl Week, Piñeiro told Jason Lieser of the Sun-Times he expects competition to come for his kicking job this coming season. And since the Bears have already met with Georgia’s Rodrigo Blankenship at the Senior Bowl, it’s safe to say Piñeiro is onto something. Because even though Piñeiro finished the season on a high note, he didn’t do enough to lock down the position.

So the Bears probably won’t go through a kicking carnival again this offseason, which … good. That was quite a circus (or was it a carnival?) and didn’t exactly work all that well. But that doesn’t mean change can’t be on the horizon.

Piñeiro might not be the only special teamer facing competition in 2020.

O’Donnell finished tied for second in the league in punts that were fair caught (26) and tied for third in punts downed (13). That’s not bad, as it showed how well O’Donnell kicked and how strong the coverage team was last season. However, O’Donnell had the fourth lowest net average (40.7) and second lowest average in yards per punt (44.8) among qualifiers. O’Donnell tied with four other punters in the fewest touchbacks (2), but was in the middle of the pack in punts inside the 20. That’s not great. O’Donnell is the longest-tenured special teams player on the roster, but could conceivably face competition for his spot for the second time in three years if the team decides it could save some money and possibly improve in the process.

Unless the Bears have some sort of device that could re-create Devin Hester in his prime years and put him back in uniform, there is no improving on what Patterson brought to the team last season.

The Bears’ special teams group wasn’t as problematic in 2019 as it was in 2018, but being better than bad isn’t good enough for a team that has competitive aspirations. With that in mind, the team might want to explore opportunities to make that group better in 2020.